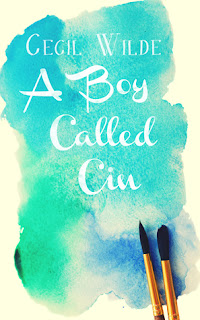 A Boy Called Cin is a standalone story by Cecil Wilde and is about Tom and Cin, two people who are unhappy with their gender assignments and find comfort and acceptance from each other. Tom is forty and a billionaire while Cin is twenty and a student. Both are bisexuals plus Tom is genderqueer while Cin is transgender. While Cin may be half Tom's age, he's more comfortable with who he is and has a better understanding of what it's like to have the outside not reflect what's on the inside. It's almost as if Cin has more life experience compared to Tom and their story is about their unexpected journey to happiness.

The book's blurb was one that caught my interest immediately but I found myself having difficulty to connect with and it may be because it felt almost as if Cin spent most of the book schooling Tom. The fact that Tom's sister Poppy is transgender and is someone he has a close relationship with should have armed him with some knowledge, but he just came off as sadly clueless. I really wanted to believe in the chemistry that Tom and Cin were supposed to have but there was just this disconnect that I couldn't shake all throughout the book. It felt as if something was missing and I couldn't find it anywhere in the story.

While the story itself lacked a bit of the heart that I need to have in the romance genre, this book was certainly original. I've never come across a book that had two characters who were both uncomfortable with their gender assignments and I definitely learned a thing or two. Tom and Cin's love story was more of a slow burn and you could see how their relationship developed over time. Overall, the book left me wanting but I will give it kudos for the writing and the originality. This was a fairly quick read and if you're looking for something different to read, A Boy Called Cin may interest you. This gets three stars. ♥