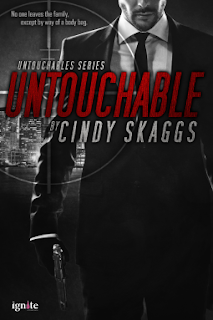 Sofia Capri may no longer be married to her mob boss husband, but her ties to him remain because of their young son Eli. When Eli is suddenly kidnapped, fingers are pointed and Sofia needs to find out who took him and get him back as soon as possible. She can't get help from her husband and his cronies and she certainly won't ask for help from the authorities, but help suddenly comes in the form of one Logan Stone, a man she thought was merely a fellow gym member except he turns out to be someone from the FBI. With neither of them sure if they can trust one another and quickly realizing that trusting anyone else may cost Eli his life, Sofia and Logan are forced to work together before it's too late for either of them and Eli.

Untouchable is the first in the Untouchables series and the debut release from Cindy Skaggs. Brimming with enough intrigue to trigger the conspiracy theorist in me and simmering with pent-up attraction and lust between lead characters Sofia Capri and Logan Stone, this was a suspense thriller that had me turning each page trying to figure out who was actual pulling the strings in the story. Having the ex-wife of a mob boss with no allegiance to either side of the law and an FBI agent assigned to her and currently on administrative leave as main characters makes for an interesting and creative touch, especially since there were times I wondered if a protagonist was actually an antagonist and vice-versa. It kept me on my toes.

There were certainly a few unexpected surprises in the story and I'm a fan of stuff like that because knowing what's going to happen next takes the thrill out of a book in this genre. It was difficult to get a read on most of the characters, with Logan being the only exception, and I'm thinking this had to with the fact that they were all involved, in one way or another, with the mob. I found myself thinking one thing about a particular character and then changing my mind later on only to be thrown for a loop again by some new revelation. Like I said, this book kept me on my proverbial toes and it was one of the things I liked best about it. It never lacked for mystery or suspense, making you eagerly anticipate what was next.

This is a first in a series and I'm curious as to what the rest of the series will hold, especially since the ending left things unresolved within the Calvetti family enterprise. I'm thinking the second book may be about Vicki Calvetti, Sofia's former sister-in-law and best friend, which leads me to wonder about her boyfriend Vince (last name not included) and if he would be in the assumed sequel. My hope is, whoever may end up in the next book, the female lead character is as complex and intriguing as Sofia Capri. The woman was a survivor and was willing to do anything and everything to protect her son, even if that meant blurring the lines between right and wrong. Nicely done, Cindy Skaggs! Untouchable gets 4.5 stars. ♥