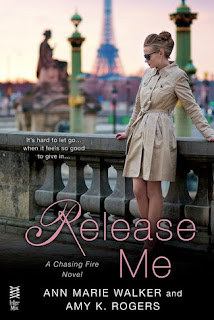 Release Me is the second novel in the Chasing Fire trilogy from the writing duo of Ann Marie Walker and Amy K. Rogers and picks up soon after the events in the first novel, Remind Me, that saw Alessandra "Allie" Sinclair ending things with Hudson Chase. Allie wants to stay as far away from Hudson as possible, but with the murder of her parents, Allie takes over as majority shareholder of Ingram Media and discovers that the stock percentage difference between her and Chase Industries is only one percent and she quickly realizes that they need to work together. And while the prospect of being close to Allie gives Hudson the chance to plead his case, he may need to accept that he has no other option but to let her go.

I've been anxiously waiting for this sequel to be released since the cliffhanger ending of book one and it certainly was worth the wait. Allie and Hudson may be very much in love with each other but the sense of betrayal that she feels from both Hudson and her late parents has her reeling. She was manipulated by her former fiancé, Julian Laurent, and her parents, but it's the belief that Hudson used her that has hurt her the deepest. Their relationship may have ended, but Hudson refuses to give up without a fight, and he desperately wants to convince Allie that he never lied about his feelings for her. His pursuit of her was so very Hudson, but my heart broke for him when he made a decision that I never saw coming from this man.

The pacing of the story was quick but not overly so and there were times that I was caught off-guard as to the direction the story went. There were certain realizations that both Hudson and Allie needed to come to and I'm glad that, as a fan of the series, I didn't have to wait 'til the end of this second book for them to get to that point. Speaking of the end, this one has yet another evil cliffhanger, one that has me even more anxious to get my hands on the third book than I did after reading the cliffhanger from the first book. It's pretty obvious that Julian has a much larger to play and that he's not the type to take defeat sitting down. I have my suspicions but won't say anything yet. For now, it's enough that I say I dislike Julian immensely.

Hudson has his secrets and it looks like those secrets may end up costing him more than he's ready to lose. Aside from the romance and the steam, it is the intrigue that is one of the best things about this series. It always feels as if there's more going on than what's being presented and readers will hopefully get answers to their questions in the third and final installment. This second one has set things up quite nicely and I'm going to keep my fingers crossed that there'll be more than a few surprises waiting for readers in the next book, which concludes the Chasing Fire series. Hudson and Allie are characters that you become invested in, more so now, and I look forward to seeing where they're headed. Release Me gets 4.5 stars out of five. ♥