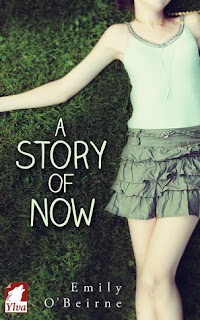 Note: This ebook was provided by Book Enthusiast Promotions via NetGalley in exchange for an honest review.

She knows that there's some sort of pull between them, a palpable attraction she's felt since they first met. It's something that turned them so quickly and easily from being strangers to being so damn very important to one another. Until now, she'd just assumed this instant connection the beginning of a friendship, one of those intense types she has never had before. And it was--is--such a good feeling to know someone likes Mia wants to be that close to her, to be that important to her.

Claire Pearson's mother never fails to remind her of how she's wasting her life on a dead-end job and limiting herself to taking just two subjects in college. She's nineteen and she's already expected to have some sort of direction in her life, but she still has no clue what it is she wants to do and doesn't feel up to being pressured. It's enough that the break-up with her boyfriend hurt and that she can't seem to fathom the energy to meet up with her friends from high school. It's like they're all going in different directions while she's stuck in neutral. Then she meets Mia and while they appear to be opposites, a friendship develops and Mia seems to understand and accept Claire without any reservation. But after a drunken kiss, Claire hopes her feelings for Mia will be the first thing in a long while she can make any sense out of.

A Story of Now is a standalone novel somewhere between the young adult (YA) and new adult (NA) genres and is the debut of author Emily O'Beirne. This wasn't "just" a love story; it's the ongoing life story of nineteen-year-old Claire Pearson and how she tries to navigate her way through the expectations that people have around her and trying to come up with expectations she has of herself. There's no doubt that she's beautiful and intelligent, but she's also like an aimless wanderer, not really finding gratification from her choices and decisions but making do anyhow. She's in transition but it's a transition that her mother wishes would go at a speed more to her liking, one that will show that her daughter is, indeed, living up to her potential (and her parents' standards) instead of the slower than a snail's pace it's at for the moment.

Forging new relationships isn't exactly high on Claire's list of priorities, what with her relationship with her boyfriend ending because of distance, both literally and proverbially, and her growing out of her friendships with those she knew in high school. Meeting Mia and Robbie becomes a turning point for her and her life begins to move forward. She finds herself with a core group of friends who truly are people she can count on. Mia's relationship with her brother Cam is also an interesting one because it's easy to see that they're comrades in the dysfunctional relationship they have with their parents, especially their mother, and while there is indeed a closeness between the two siblings, Cam being more independent and having his own life and career makes him as Claire's somewhat constant touchstone and occasional buffer.

Claire is a lead character that was way too easy for me to like and understand because so much of her and her story reminded me of, well, me. I also feel that she's someone that a lot of readers can not just empathize with but also see as a reflection of themselves, whether one part or more or in totality, either in the present or sometime in their past. Her story does not end with this book but it doesn't have a cliffhanger either, so one could possibly read it as a standalone, though I have a feeling that once you do read A Story of Now, you'll end up like me--wishing it were already December so you could find out where Claire's tale will lead her, whether it be in her burgeoning relationship with Mia or her college and career plans. There's still a lot of story to be told, but for now, this 2015 favorite is exceptional. Five-plus stars. ♥

Purchase A Story of Now on Amazon | B&N | Kobo.