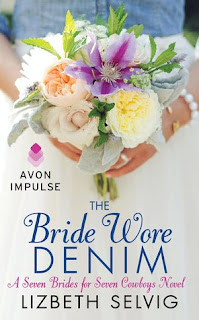 Note: This ARC was provided by Avon Impulse in exchange for an honest review.


Harper Crockett is the second in a brood of six sisters, but she's the one who's always been different. She doesn't share the physical attributes her sisters got from their mother and she's considered a gypsy of sorts--a flighty artist with her head in the clouds. When the six sisters join their mother and grandmother for her father's funeral, memories, both good and bad, come rushing back of life in Paradise Ranch. When one of those good memories stands before her in the form of her childhood best friend and neighbor, not to mention her oldest sister's ex-boyfriend, Harper's taken aback by all the sparks that fly between them.

Among the Crockett girls, Cole Wainwright has always been closest to the extraordinary Harper. He knows she's only in Wyoming for a week before she has to return to her life in Chicago, but he can't help letting her know that he wants to make a play for her heart. His relationship with her sister and her promising career in the city have her hesitating and they don't agree on certain issues regarding the future of Paradise Ranch, but Harper's ties to her family, her home, and Cole have made her confused about what it is she truly wants for herself. Will she have to choose or is it possible to have everything she ever wanted?

The Bride Wore Denim is the first book in Lizbeth Selvig's newest contemporary romance series, Seven Brides for Seven Cowboys, and is the first book by her that I've read. A lot of books tend to become overly complicated when too many minor characters are thrown in and while there was a fair amount of supporting characters here, it never felt crowded or distracting. All six Crockett sisters had different personalities but the three older ones--Amelia, Harper, and Joely--were prominently featured in this story. The family dynamics are complex, and that's usually what happens when you're part of a big family like theirs, but I loved how they all came together when they needed to, setting aside whatever differences they may have had in order to show and provide support for one another and whoever required it most.

Harper Crockett and Cole Wainwright were highly likable characters who shared a similar sense of humor and a genuine love for the land they had. They were also both very stubborn and even when they were willing to listen to the other's point of view, they were so stuck on what they thought was right that they refused to listen to reason or find some sort of middle ground. Skylar Thorson was a supporting character who played pivotal part in Harper and Cole's love story and I really liked how she really matured within the story and I'm hoping she'll be featured in her own book later on in the series (because there are only six Crockett sisters and the series calls for seven brides...so yeah). Skylar is also a testament to how kids and teens are more observant and sensitive than adults give them credit for and can be quite wise indeed.

This was a story about falling in love with your best friend and how family comes together in moments of tragedy and triumph. This was also about discovering things a child may not know about his or her parents until decades have passed and learning that what we once thought was true could be interpreted a different way. Lastly, this book was about the dreams we have for ourselves and how those dreams can change or grow to be even more than we anticipated. The Bride Wore Denim reminded me that, no matter where life takes me, I always end up heading for home to find my greatest comfort. Harper also reminded me quite a bit of myself and maybe that's why she's now become one of my all-time favorite female lead characters. I can't wait to read the rest of the series! Harper and Cole's love story gets 4.5 stars out of five. ♥