Review: Crazy Over You by Wendy Sparrow (Taming the Pack #3) 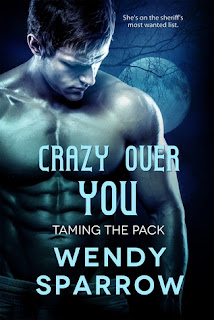 I'm not a monster.

I am a monster.

Crazy Over You is the third and final book in the Taming the Pack series from author Wendy Sparrow and shifts the attention from the Glacier Peak pack to the still fairly newly established Rainier pack. Sheriff Travis Flynn has his hands full with the members of his pack, most of whom appear to be far too busy hoping from one bed to another instead of pairing off and actually mating with one specific partner. Then he wakes up to a knife held against his neck and a very naked woman named LeAnn Wilcox, the sister of the lycan who betrayed both the Glacier Peak and Rainier packs and who was very much dead...until LeAnn informs Travis that her brother isn't dead at all and she intends to find out exactly what happened to him. But when Travis and LeAnn become scent-matched, things become far more complicated for both.

I always end up with mixed feelings when I get to the end of a series because I love getting to know the characters and absorbing their stories but I also dislike having to say goodbye. Of course, if Wendy Sparrow decides to add a book or two (or more) to the series, I'll gobble each one up happily. If this truly is the last book, at least it ended on such a high: with a story unique to the lead characters, Travis Flynn and LeAnn Wilcox, but still with the the patented mix of humor, romance, and suspense that give readers thrills and chills. LeAnn has been through a lot in her life and it's made her suspicious and hesitant to trust people around her. She's a bit off-kilter, an observation that hits Travis from the very instant they first meet and the scent-match is made, but she isn't crazy. What she is is a survivor and somewhat of a loner.

The laughs are still very much there, but LeAnn's personal history is dark. It's easy to think of her as nothing more than a loony lead character, but there are reasons for why she is the way she is and my heart broke for her when I learned about her life story prior to coming to search for her brother. It is that very relationship that makes her scent-match with Travis a somewhat controversial one, unlike Dane and Vanessa Hansen's from Past My Defenses and Jordan and Christa Hill's from This Weakness for You. It is, after all, difficult to trust the sister of the lycan who appeared to be behind the planned annihilation of the Glacier Peak pack. Then there's LeAnn's insistence that she isn't lycan at all--she doesn't appear to be capable of shifting (or so she believes) but has traits that you would find in someone who was actually one.

The intrigue aspect is amped up in this third book and events that occurred in the first two books factor into this story, so I'm going to highly recommend that you read the books in order so you don't miss out on anything. There's more mystery and suspense here, and I feel that it was necessary since everything that happened from the first book to the second book finally culminates with this third book. I loved books one and two, and number three simply reiterated just how addicted I am to the Taming the Pack series. This has become a 2015 favorite and I would encourage anyone who enjoys the paranormal-suspense-romance genre to check these books out. I hope the stories and characters evoke as much love and laughter with you as they did with me. I'm crazy over Crazy Over You and I'm giving it five-plus stars. ♥

Pre-order Crazy Over You on Amazon | B&N | Kobo.