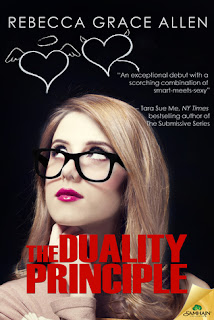 The Duality Principle is the first book in the Portland Rebels series by Rebecca Grace Allen and is set in Portland, Maine. Since by the time I write this review I'll already have read the two available books in the series, I'm going to assume that the books are about a group of four friends--Connor Starks, Dean Trescott, Jamie Matthews, and Mikey Pelletier--who grew up together in Portland and how they find love. Book one is about Connor, a former bad boy trying to finally lead a better life, and Gabby, a nice girl who wants tap into her naughty side but can't seem to find the right guy to do help her out, until she does but has no clue that her blind date is a reformed rebel who only wants to show her the good guy he has to be.

Gabriella Evans is a mathematical genius spending her summer working on her doctoral thesis--to disprove the principle of duality, an algebraic principle that states that when a theorem is proven true then its dual theorem is also true. Logic rules her life but what it appears that the rumbling engine of a motorcycle and the stranger sitting atop it are taking over, filling her fantasies with things that she's only hoped to have experienced with the men she's been with. Upon the prodding of her best friend, she agrees to go on a blind date, but, at first glance, the geeky guy she's set up with couldn't be further from her fantasy...but he's actually hot and there's something about Connor Starks that doesn't quite compute.

This was a fun take on the whole opposites attract trope found in new adult (NA) romance novels and I liked how Gabby and Connor initially saw one another and proving, as the story went on, that you shouldn't judge a book by its cover. Connor was such a sweet guy but when he finally gave Gabby exactly what she wanted, he pretty much fogged up my reading glasses. *fans self* The sexual tension between the two lead characters was almost palpable and the two just seemed perfect for each other, even though it took them a while to finally realize that. Aside from the humorous banter among the characters, there's also something going on between Jamie and Dean, whose own story will be told in the second book.

You don't need to be math whiz in order to appreciate the story and the principle of duality isn't too difficult to understand. When you think of it in terms of people, it is indeed very possible for someone to have more than one side to them, and I'm not talking about being schizophrenic. The different facets to an individual's personality is what makes them unique when combined together and far more interesting. Multi-layered characters will always be the ones I'm more drawn to because they're like puzzles that you want to figure out. Gabby and Connor were sweet but steamy, naughty but nice, smart but silly, and their love story felt familiar but had its own unique twist to it. The Duality Principle gets 4.5 stars out of five. ♥