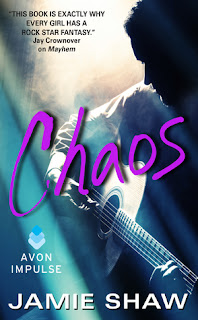 When he starts to argue, I laugh and kiss him, silencing him with my answer. I kiss him until his arms are circling around my waist, until I’m his and we both know it. “Okay,” I say when I part my lips from his. “But if I’m yours, you’re mine.”

My thumb traces the curve of his jaw, memorizing the brush of his stubble, the way his eyes look in this moment, the way his voice sounds when he says, “I’ve been yours for a while.”

It was at a middle school talent show that Kit Larson found inspiration in the form of green-eyed, black-haired guitarist named Shawn Scarlett. Watching him perform made her fall in love with the musical instrument and the boy playing it. A few years later, she wanted to let him know how much he changed her life, but what was a night she would never forget ended up breaking her heart at fifteen. She would always love playing guitar and she would always hate the guy who she foolishly offered up her heart and body to.

It was at an open call audition that Kit Larson found her opportunity to become part of a band she loved--The Last Ones to Know--and to once again see Shawn Scarlett. But he doesn't seem to remember her and she doesn't clue him in on what happened between them six years ago. When she's invited to become their new guitarist, she and Shawn begin a love-hate relationship of sorts, one that confuses everyone around them, including each other. She avoids him as much as possible but she can't exactly do that on a tour bus.

It was atop a hotel while on tour that Kit Larson found herself falling in love all over again after having spent time discovering the person behind the persona that was Shawn Scarlett. Their feelings toward each other become too much for either one of them to deny any longer. But Kit finds herself plagued with doubts and insecurities, especially when the secrets of the past rear their heartbreaking heads, leaving Kit to decide if she's ready to truly let go of their past in order to have the possibility of a future with Shawn.

I read Mayhem, Riot, and Chaos one after the other and, like the addict that I have now become, I simply couldn't get enough of this series. Jamie Shaw's third and latest installment would probably be considered a second chance rock romance by some, but I see Shawn Scarlett and Kit Larson's love story as more of teenage-crush-turned-true-love kind of a thing and it really was all about timing with these two. Let's face it: Kit was fifteen and Shawn was eighteen when they ended up in bed together and neither of them could have really been experiencing feelings of the other being their one true love. Sometimes, two people need to go their separate ways to grow and mature and discover themselves before they're truly able to share who they are with a significant other. That was the case with these two, though I can more than appreciate Kit's feelings of hurt and abandonment when Shawn never called or reached out to her after their one and only time together. But, her feelings toward him at fifteen were nothing compared to those at twenty-one.

This book could have gone in the direction that one would expect, but, as usual, Jamie Shaw took the road less traveled and came up with scenarios and characters that were not idealistic but felt more realistic. I love how she never fails to surprise me at least once with these books of hers. They leave you wanting...wanting more, that is. It's like being at a kickass concert and needing encore after encore. I know there's one more The Last Ones to Know member left to tell his story, and I will certainly be waiting anxiously for its release, but I find myself dreading the end of the series. That's what happens when you have stories and a cast of characters that leave you intoxicated and, without fail, a goofy grin on your face. Shawn and Kit's story checked off everything on my romance read checklist and I'm hoping that you don't miss out on reading Chaos or the two other books in the Mayhem series. The weekend's coming up, so do yourselves a favor and curl up with this trio of 2015 favorites. And yes, book three gets five-plus stars too. ♥