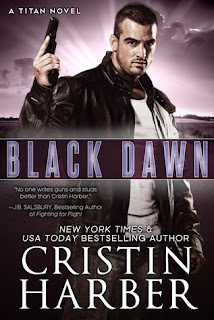 Fans of the Titan series know all about Parker Black's prowess when it comes to technology, but with Cristin Harber's latest installment, Black Dawn, we get to see Parker being the computer genius that he is AND witness how capable he is in the field as well. When the life of the girl he wants but can't be with because she's engaged to his friend is put at risk--first at the hands of her fiancé and then by a group of terrorists--Parker's controlled and organized world goes into disarray. But Lexi Dare isn't going to allow Parker to handle this on his own. They have their share of secrets, but once they come together and entrust their lives in one other's hands, they may finally realize just how perfect a combination they are.

I'm feeling so torn with this sixth full-length novel in the series. I read the books back-to-back, from the first one to this ninth overall release and I can't help but feel sad because all the current members of the Titan Group have settled down with the women they've fallen in love with. Yes, I know there's a spin-off series, Delta... Still, there may be a glimmer of hope that Parker and Lexi's story isn't the last one but I won't let me expectations get away from because disappointment as a heck of a bitter pill to swallow. If this is indeed the end of the series then suffice it to say that the high level that was set by the first eight books, whether they be the full-length novels or short novellas, was passed with black and silver colors.

Parker Black and Lexi Dare have known each other for a couple of years, thanks to Lexi's romantic relationship with Parker's friend, but unbeknownst to either of them, they've been connected for far longer. As BlackDawn and SilverChaos, their prowess as hackers knows no bounds and on the rare occasions that either of them do hit a snag, there's no one else they would turn to. With Lexi's personal life reaching a point of no return, Parker is the one person she knows she can turn to. Things get chaotic pretty quickly and the attraction the two have always felt for one another but have never been able to act on evolves into much more. These two seem like opposites but have a great deal in common and are equals.

Whether you've only read one or two of the books in the series or have devoured every single one of them (high five!), Parker is that one character who exudes a level of mystery because there isn't really a great deal about him that's shared other than he's the go-to tech guy in the Titan Group. And, like all great mysteries, Parker Black had layers to him, and as you peeled off each one, you could see that there was so much more to him and he certainly held his own when he left the comfort of his techno-savvy "batcave". I like that he was paired with someone like Lexi Dare and that she was as much of a genius as he was. The realization that he was BlackDawn and she was SilverChaos was one of my favorite moments in the book.

I've made no secret how addicted I was to all things Titan while reading the series. Going from one back to another, nine in total, in a span of three days can prove to be tiresome, but I felt anything but tired. With enough action and suspense to keep your blood pumping and a fair amount of sex and romance to put on your smile on face, these books were the kind of company you want to keep with you when you're looking for more than your run-of-the-mill alpha military romance. You'd think that after reading this many books, I'd have my fill of the Titan series, but nope. I would never say "no" to more, but if this is truly the end, then what a way to go. The series has become an all-time favorite and Black Dawn gets five stars. ♥