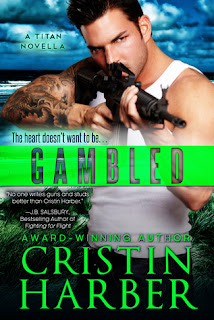 Gambled is a novella in the Titan series from author Cristin Harber and should be read after the third full-length novel, Westin's Creed, which lays down the groundwork of why Brock Gamble finds himself out of a job with the Titan Group and why his family has left him. He was the guy that everyone turned to when they needed a leader, someone who was willing to risk his life for his men. He was his wife's superhero, a man who provided for his family and a father who looked out for his girls. Then he took a risk, a very miscalculated one that cost him the men he worked with in the Titan Group and had Sarah Gamble walk out on him with his children in tow. He's lost the trust and respect of everyone who ever mattered to him.

I couldn't help but shake my head when it came to Brock's actions in the third novel, but I absolutely understood where he was coming from. With the kind of motivation thrown his way, I highly doubt that anyone else in his position would have felt they had much of a choice. But see, that's the thing. He did have a choice and he went with the one that was triggered by the panic and helplessness he had coursing through him. I am glad, though, that this novella allows readers to gain a bit more insight on him. He kept his work a secret from her and their kids and he kept them a secret from the men he considered part of his family. You can't help but feel for him, especially since he is really a good guy who made a bad decision.

This is a quick read but one that's a must-read for any Titan series fan. It's about forgiveness and redemption and realizing what family and friendship is truly about. Aside from Brock and Sarah's story, I loved that Jared and Sugar Westin were part of the story. Jared and Brock have history, after all. I couldn't help but have a laugh over Jared's revelation as to how he expressed his anger and disappointment toward Brock. It was so quintessentially Jared and was further proof that there's no quite like him. Might I suggest that you read the books in order, so that you can fully experience and appreciate everything that this thrilling series has to offer. I'm going to be giving Gambled four stars out of five. ♥