Review: The Player Next Door by Kathy Lyons 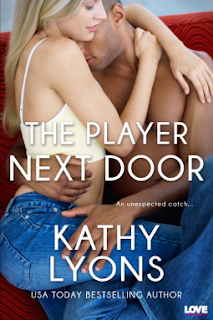 The Player Next Door is a standalone contemporary romance novel about an NBA star who sticks with a system that he swears by and a college professor who wants to prove to her family and ex-boyfriend that she's capable of handling her life on her own. Mike Giamaria is spending his summer house-sitting while recovering from his injury. The minute he spies his neighbor Tori Williams precariously perched atop her roof, Mike's summer of solace goes awry. He's never met a woman quite like Tori, but Mike's system has proven that love is nothing more than a distraction and basketball is his life...until Tori decides it's time to show Mike that love can make him even better and that she and basketball can both be part of his life.

Mike Giamaria and Tori Williams's love story is light-hearted and quirky, what with two people whose being together may not make a lot of sense but seem to be a perfect fit. As is the case with a lot of other athletes, Mike sticks to certain beliefs that he feels have brought him success, one of which happens to involve not allowing women to distract him. Taking attention away from the game of basketball is a surefire way for Mike, who is no longer the hotshot rookie he once was, to remain the top level player that he is. However, the intelligent but kooky Tori could very well be the first woman he may be willing to chuck the whole system for...but he's not sure if he's ready to sacrifice basketball for anyone, even Tori.

The pacing of the book was good and I definitely felt that there was chemistry between Mike and Tori. One of the things that didn't really make much sense to me, though, was neither Mike or Tori telling Tori's overly persistent ex-boyfriend that they were a couple, or at the very least, spending time together. It would have certainly spared all of them the headache of the poor sap constantly showing up where he wasn't wanted. It's also sad that for such an intelligent guy, the ex was utterly clueless. I also didn't get why Tori's father did what he did regarding the basketball game that he was supposed to see with Tori. His behavior was so weird and made no sense. Still, I enjoyed The Player Next Door and give it four stars. ♥

Pre-order The Player Next Door on Amazon | B&N | Kobo.