Review: Breaking Her Rules by Jennifer Snow (Beyond the Cage #1) 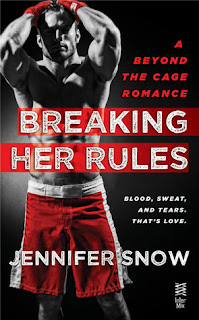 Grace Andrews is no longer the shy teenager who quietly had a crush on her best friend's older brother. She's all grown up, has a good job with the MFL, and is about to move in with her boyfriend, an executive with the MFL. But when her best friend gives her a call and asks if her brother can stay with Grace for a few weeks, she isn't able to say no. Now, not only does she share her living space with the one guy she fantasized about for years, but she'll soon have to work with him when he's suddenly signed by her boyfriend for an MMA match that Grace doesn't believe he'll be prepared for in the short amount of time.

Walker Adams walked away from law school with one semester left before getting his degree to pursue his longtime dream of becoming a professional MMA fighter. He appreciates Gracie Andrews letting him stay with her while he tries to find a place to live but she goes above and beyond by calling in a few favors and helps him find a job and later a trainer when he's signed as a replacement fighter for an MMA match. Walker knows he needs to be in top form to even have a chance at defeating the man he's pitted against, but he finds himself distracted by the girl who's grown up to be everything he could ever want in a woman.

Breaking Her Rules is the first book in the MMA contemporary romance series Beyond the Cage from author Jennifer Snow. Grace Andrews and Walker Adams grew up with fairly different lives, she living in poverty and he one of privilege, but that's only one of the reasons Grace felt she would never be noticed by her best friend's brother. But it's been five years since they last saw each other, and now Walker sees Grace in a whole new light. He's appreciative of everything she's doing to help him out, especially since his father basically cut him off from any financial assistance once he made it clear he was taking a break from law school to become a professional MMA fighter. He doesn't want to cross the line with her, but he finds it difficult and he doesn't think Grace's boyfriend, the MFL matchmaker who surprisingly signs him for a match, appreciates her the way he should. Grace's feelings for Walker come back in full force but she's resistant to him because her head tells her that her current boyfriend is the sensible one for her to be with.

There's a fair amount of chemistry between Grace and Walker, but I did feel as if it there wasn't an actual and believable love connection made until the last few chapters of the book. She was very rigid with the idea of the ideal kind of life and partner she was supposed to have, so there were times I grew frustrated with her and how she treated Walker. There were also times that it felt as if Walker was more in love with her than she was with him, considering their limited interaction wasn't a strong enough basis for Walker's evolving feelings. I would have understood him having lustful notions, but actually falling in love? Not so much. I also wondered why it took Walker as long as it did to decide that he would pursue his MMA career. After all, there were all those years in college and then law school, and with two semesters left, that's when he decides to walk away? I would have also liked to have delved more into why Walker wanted to be an MMA fighter, especially since his own trainer didn't feel as if both his head and his heart were really in it.

All things considered, I enjoyed the overall story and while I did like Walker more than I did Grace, they were both highly likable characters who had deeper back stories and histories that I would have wanted to learn more about. The cast of supporting characters was also interesting, namely, Erik Johansen, the boyfriend that you couldn't help but hate, Tyson Reed, owner of Punisher Athletics and Walker's trainer, and Kylie Adams, Walker's sister and Grace's best friend. I think that with more development in Grace and Walker's love story and an increase in the MMA action, this would have been an excellent beginning to the series. Still, this was a good idea that was executed fairly well and I am curious as to what will come next in the series, especially after reading that sneak peek at the end of this first book. If you're a fan of MMA romances, Breaking Her Rules is a book you may want to check out, especially since it's the first in what I hope will be a series worth keeping an eye on. I'm giving this Jennifer Snow-penned romance 3.5 stars. ♥