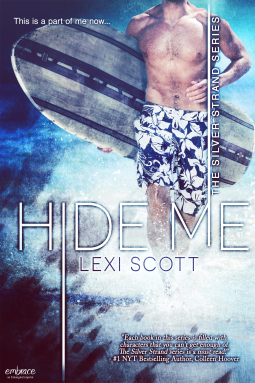 
Hide Me is the first book in the Silver Strand series by Lexi Scott, which is the pseudonym of the writing tandem of Steph Campbell and Liz Reinhardt. The book was originally released in August 2012 under the title of Lengths and under the actual names of the two authors but I never read the first edition, so I can't really compare the two, though this new edition is supposed to have new material. This new adult title is about two you people who are lost and wading through the current circumstances of their lives. Sometimes, it's simply easier to run away, whether it be from the self-inflicted pain or guilt that weighs upon your heart or shrugging off and doing nothing about the responsibilities and pressures that have burdened your mind and are now stuck, in danger of treading aimlessly through it all until they drown.

Nineteen-year-old Whit Conrad has run from landlocked Pennsylvania, her parents, and the life plan that she's always held firm on to the sand and surf of California. The job she has, the school she goes to, even the guy she sleeps with--they're not how she imagined her life to be a year ago, but she deserves all of it, and no one can tell her otherwise. Not until a surfer named Deo Everett enters the tattoo shop she works at. Being around him makes her feel good and she can see that his feelings for her are real and have grown, but she's got too many secrets weighing her down and she refuses to share them with him, even though, if she's absolutely honest with herself, he's the only guy she's ever felt the way she does for. She keeps him at a certain distance and sometimes pushes him away, thinking he'll leave her once he learns all her secrets.

He may have just turned twenty-two but Deo Everett has yet to grow up. College wasn't his thing and he was fired from his last job, so he spends his time either surfing or partying. He lives with his grandfather and spends time with his mother but his father is off in some other country yet again. He knows he should do something with his life, but he doesn't do anything...until he meets the college coed that is Whit Conrad. Deo wants everything that Whit has to offer, but she's giving him close to nothing, leaving him in a tortuous limbo of sorts. He wants to be able to help Whit sort out whatever it is that's weighing her down, but he's also got his own problems that he needs to deal with sooner rather than later. How can Deo have a life with Whit if the girl he's fallen in love is constantly hiding the real her and refuses to be found?

I quite enjoyed this book and liked how Deo and Whit seemed like opposites but were somehow experiencing the same "lost" feeling. Whit is running from her life and leading and re-living one that isn't truly hers while Deo is just standing by as life passes him by. Whit's guilt and grief are getting the best of her and has forced her to become someone else and she doesn't want anyone to know the old Whit. Deo doesn't want to be anything like his father, not settling down long enough to commit to Deo's mom or Deo himself, but in the process, he doesn't pursue anything and simply makes do. These are two damaged characters and their love story, while at times sweet and steamy, is highlighted by their respective inability to truly move forward as individuals, making it nearly impossible for them to move forward as a couple.

The story itself had depth and didn't go the usual route that books about damaged lead characters have. The changes that were necessary for Deo and Whit to go through didn't happen right away, nor did they happen because they were together. Theirs wasn't a case of making changes for each other or to make the other one happy, which I appreciated because then they were done for the right reasons and not merely to please. The cast of characters was also one that was a mix of fun but gave Deo and Whit food for thought, especially Cohen Rodriguez, Deo's best friend. Silver Strand is shaping up to be a series that will be worth going through, one book at a time, and Hide Me has just become one of my 2015 favorites. Five-plus stars. ♥