Review: Under the Covers by Rebecca Zanetti (Maverick Montana #2) 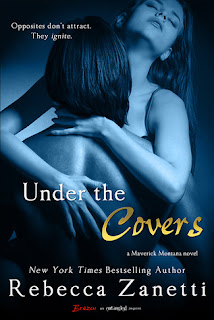 Sheriff Quinn Lodge is good at his job. He can tell when someone's hiding something from him and that's exactly what his gut is telling him the more time he spends with gallery owner and curator Juliet Montgomery. They've been dancing around one another for quite a while, but even though Juliet is as attracted to Quinn as he is to her, she's been trying to keep her past a secret and for good reason. When that very same past comes looking for her in the quiet town of Maverick, Montana, Juliet knows she's either going to have to make a quick getaway or come clean to the man who makes her want to stay and try.

Under the Covers is the second book in the Rebecca Zanetti-penned Maverick Montana series and turns the spotlight on the second among the Lodge-Freeze siblings, Quinn Lodge, the town sheriff up for re-election and landlord to Juliet Montgomery and her art gallery. Theirs is what you'd call a slow burn romance and even when they do begin seeing each other, neither appears to be ready for commitment, mainly because of Juliet's secret that has ready to make a run for it and Quinn's track record when it comes to women. Of course, with a bit of family meddling, these two don't stand a chance of NOT falling in love.

Juliet's past is a very interesting one and puts her in danger once it catches up to her in Maverick. It also clues readers in to her cultured and sophisticated bearing, which actually makes her verbal tiffs with Quinn all the more entertaining since he isn't always as cool and calm as he may seem (but then all the Lodge-Freeze siblings do appear to have issues with their tempers). Quinn being a no-nonsense, stick-by-the-rules law enforcer makes things even more complicated for Juliet, which is why she's far more hesitant to really come clean in the beginning. But there isn't really any doubt of how protective Quinn is of his Juliet.

One of my favorite things about the series is the family dynamics in the Lodge-Freeze clan and the fact that even when these guys disagree, the love and respect remain. Yes, they do like to do their fair share of matchmaking, but then it appears to be an ongoing thing in their town, plus hey, they simply want everyone to reach their happily-ever-afters, so you can't really find much fault in that. Juliet and Quinn were a combustible combination and one that had to overcome their self-imposed limitations in order to truly find happiness together. Under the Covers was an exciting and enjoyable read, garnering 4.5 stars. ♥

Purchase Under the Covers on Amazon | B&N | Kobo.