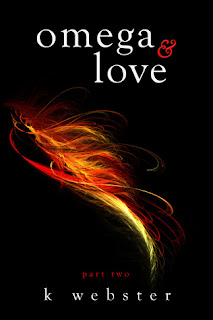 Note: This ARC was provided by IndieSage PR in exchange for an honest review.

Love is all you need.

It gives me strength.

I am no normal person.

I am not afraid.

Omega lost his chance to become the Seraph Guardian he's always wanted to be when he allowed himself to be manipulated by the Leviathan he fell in love with. Now, he's forced to work for the enemy and is looked upon by many of those he used to stand side by side with as an enemy himself. When he's tasked to partner up with the woman who betrayed him, Omega balks at both having to be with Lovenia and the mission they're given. But there's still something about Love that calls to him, making him believe that there's a side to her--one that is good--that she keeps buried inside. Can he trust his instincts and risk having his heart broken once again? Is he ready to face Hell's fire and brimstone for a chance at Heaven?

Omega & Love is the second part in the Alpha & Omega book duet from author K. Webster and it takes place six months after the events in the first part. Omega is sowing the proverbial seeds of his actions and while he blames Lovenia for having deceived him, he knows that his actions were his own. He doesn't trust or like her but he can't seem to turn away from the feeling that not everything that happened between them was a farce. When Omega did what he did while on his final assignment, he had what all humans have--free will--and his choice to allow his need for revenge get the best of him cost him his would-be wings and now he works for HEL instead of HEA. Still, it's obvious that he's still the Omega that he's always been and he knows that the mission he and Love are sent on goes against all the rules set in place.

It was pretty easy to dislike Lovenia in the first book, but learning her story here in the sequel puts everything that she's done into perspective. Sometimes, we do what is necessary for a higher purpose, and we learn what that purpose is, making it impossible for us to go on hating the Leviathan nicknamed Love. There's even a tiny glimpse of the woman hidden beneath the temptress that is Lovenia in the final chapter of the first book, and I simply refused to believe that Omega had been duped the whole time they were together. He must have sensed something good and true about her to have made him willingly give her his heart and trust. Love's past is often painful to read and there may be triggers for some readers, but those flashbacks are what gives readers the understanding necessary to have admiration and empathy for her.

Omega and Love were a partnership made in Hell but it was one that was destined for much more than either one of them would have thought. I loved that Connor and Lark Miller were in the story and finding out how Alpha and Omega were originally connected before being part of HEA had my heart squeezing tightly in my chest. There were a few new characters introduced, each one making their mark and highlighting the author's gift for making each one of them memorable, even those that you can't stand. This was a book about the redeeming power of love and redemption. It wasn't about religion; it was about faith and how having it can see us through even the darkest of times in our lives. Omega & Love joins its predecessor on my 2015 list of favorites and I'm giving this second K. Webster read five-plus stars. ♥