Review: Baby's Got Bite by Candace Havens (Take It Like a Vamp #2) 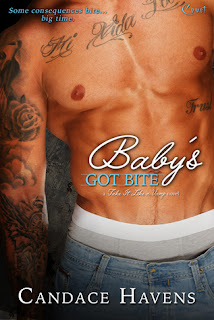 Bennett Langdon and Linc Monahan agree to a no-strings-attached one-night stand while at their mutual best friends' wedding. It's just sex, after all, and neither wants to enter into a committed relationship. Ten weeks' later, though, Bennett finds herself carrying Linc's baby. Linc is shocked because a werewolf like him isn't supposed to be able to get a human like Bennett pregnant. Neither of them was planning to tie themselves to one another after their one night together, even though they've thought of not much else except that for weeks. As they and those closest to them prepare for the birth, Bennett and Linc quickly realize there are some factions not willing to welcome the unborn child or the two of them as a couple.

Baby's Got Bite is book number two in Candace Havens' paranormal romance Take It Like a Vamp series and is about the best friends of the lead characters from book number one. Linc Monahan, a werewolf and fashion designer, and Bennett Langdon, an assistant to her best friend graphic artist, have a one-night stand that results in an unplanned pregnancy. Linc and Bennett are two very independent individuals who like things done their own way--what with being artists and all--so when they end up living together because of the pregnancy, the adjustment period is shorter than expected because of Linc's being a werewolf. There's a lot of banter but there's also a fair amount of disagreements between the two, so those make for entertaining exchanges in the book. Then, when information about Bennett comes to light, things become even more interesting, taking on a forbidden star-crossed lovers feel to their relationship.

I liked Bennett's independence and feistiness as well as her begrudging embracing of Linc's care and attentiveness. Linc was a very protective guy who wanted only what he felt was best for Bennett and his unborn child. These two together brought a smile to my face, especially when Bennett's own protectiveness of Linc, their baby, and their life together came into full force because their family was being questioned and threatened by certain forces. I'm glad these two had to fight for their relationship and that their wanting to be together wasn't simply because of their impending parenthood. I will say, though, that I was rather surprised that Linc was Irish because there was absolutely no hint of it at all in the first book, but hey, it didn't bother me in the least. It was also fun to have Nick and Casey Christos in prominent supporting roles. Baby's Got Bite was a sequel that surpassed expectations and gets four stars. ♥