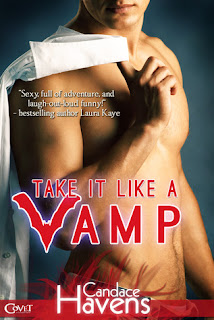 Casey Meyers has had a thing for her close friend since she first met him nine months ago but she knows she can never compete with the Barbie-like women he's known to date. Wouldn't it surprise Casey to learn that Nick Christos has not only had wanted to be with her all this time, but that he's also a Vrykolakas, a supernatural creature that is half vampire and half werewolf. When Nick's interest in Casey comes to the attention of a dangerous enemy, Nick vows to keep Casey safe from harm, but the best way to do that is to marry her and mark her as his. That would mean divulging his secret to Casey and Nick fears that once she learns that he has a beast lurking within him, she'll see him as nothing more than a monster and leave him.

Take It Like a Vamp is the first book in the Candace Havens-penned series by the same title and is about two close friends who are mutually attracted to one another but neither believing they're suited for the other. Casey Meyers doesn't think she's at par with the women she's known Nick to date and Nick Christos doesn't think Casey deserves a creature like him--someone who isn't human. But when Nick decides to ask Casey to accompany him to a gathering that has other supernatural creatures in attendance, it becomes obvious to many there that Casey is more than a friend, thus putting her life in danger with a power hungry witch targeting her. Nick protects her but he can guarantee her safety better if she agrees to be his wife and if he marks her, which would require him to confess his centuries-long and life-changing secret.

I liked the story because it did give an interesting twist to the whole vampire and human romance, especially since I had never come across a half-vampire, half-werewolf character before. Casey and Nick were sweet and flirty, but Casey's insecurities did become a tad too tiresome after a while. I get it--she didn't think someone like Nick would ever be attracted, what more fall in love, with a girl like her, but even after his numerous reassurances, she still had her doubts. Nick was like the perfect guy, except he wasn't human and he was just a couple of centuries short of being a millennium old. It was interesting to see how Casey and Nick navigated the change in their relationship from being friends to lovers and then how Casey handled the news about Nick's being a Vrykolakas. I enjoyed Take It Like a Vamp and give it 3.5 stars. ♥

Purchase Take It Like a Vamp on Amazon | B&N | Kobo.