Review: This Weakness for You by Wendy Sparrow (Taming the Pack #2) 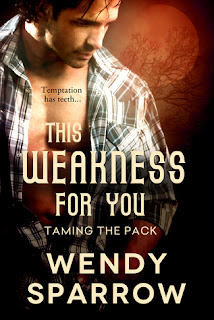 This Weakness for You is the second novel in Wendy Sparrow's paranormal romance series entitled Taming the Pack. Here we have Glacier Peak's very own alpha, Jordan Hill, finding his scent-match with none other Christa Hansen, younger sister of Dane Hansen, the male lead character from the first book, Past My Defenses. Jordan hasn't mated with any of the other females in his pack since the deaths of three females two years ago, each one connected to him in some way. When he unexpectedly meets and scent-matches with Dane's sister Christa, he thinks fate has a warped sense of humor. But try as he may to stay away from her, Jordan can't deny that Christa is his. Her heart tells her that Jordan is her forever, but how can she prove to him and the rest of the pack that she's worthy to be his if she's always seen as a weakness?

This series just keeps getting better with each book! Jordan Hill more than piqued my curiosity in the first book and with everything that happened there, I just knew that the guy deserved to have his own happily-ever-after. Because, really, who the heck wants the deaths of three female lycans on his conscience? He was the epitome of what an alpha should be, but when he's scent-matched to Christa Hansen, a human whose supposed lack of physical intimidation may be considered a weakness but who ends up making Jordan weak with need for her but also stronger in his determination to protect her and their pack. Christa is often underestimated by her overprotective mate Jordan and her equally overprotective brother Dane, but she's stronger than she seems, having the intelligence, foresight, and courage to do what is necessary.

Humor is something this story never lacks and it appears to be a staple of the series, along with the suspense that has you wanting to solve the mystery of who's really after whom and what's really going on with both the Glacier Peak pack and the fairly young Rainier pack, led by new alpha Travis Flynn. I figured out what was happening early on and the one behind it came to me a bit later on, but it never lessened my enthusiasm to see how everything would be revealed and, more importantly, how the poaching and betrayal would be resolved. There's quite a bit more action that goes on here, especially since the story involves more than one pack, and I found myself cheering on the lycans and humans who were after the poachers as they tried to finally be rid of them once and for all, even amidst all the anger and bloodshed.

Reading about Jordan's transition from the alpha he was in the first book to the alpha he became here in the second book was endearing in a way because you could see him transitioning into a better leader. Christa was the perfect partner for him, especially because she proved her worth in ways that majority of the other characters never expected. I liked how the story also touched on family, both Jordan's and Christa's and then the family they had with the pack, and, of course, Dane and Vanessa Hansen were still very much around and seeing where they were in their lives together put a smile on my face. I read this second installment right after reading the first one and I have to say that I've become very addicted to these lycans and their mates. This Weakness for You was a very worthwhile read and it gets five stars. ♥

Purchase This Weakness for You on Amazon | B&N | Kobo.