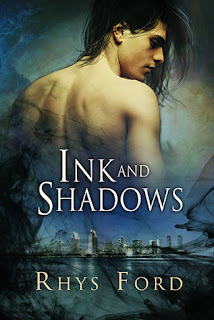 Note: This ARC was provided by Dreamspinner Press via NetGalley in exchange for an honest review.

The Four Horsemen of the Apocalypse are feared by their fellow immortals as well as by humans who have read or heard about them, regardless of whether they are followers of a denomination or not. Death, War, Famine, and Pestilence can only be seen by mortals who are considered insane, so does the fact that tattoo artist Kismet Andreas can see Ari and Mal, War and Pestilence, respectively, mean he's gone off the deep end? But there's more to Kismet than the ink on his skin or that he's healed after the vicious attack Ari and Mal rescued him from. He's become a pawn in a plan that soon escalates into a battle to save mankind.

Ink and Shadows is the first novel in the series with the same title and is the first work by Rhys Ford that I've ever had the pleasure of reading, and what a pleasure it was! This is urban fantasy at its creative best, with world building done in such a descriptive manner that picturing everything in my head made me feel as if I was watching a movie camera panning along the scenery. The story itself was original, something I had never come across in all my years of reading fiction, but some of the settings are familiar, so you don't immediately feel as if you're immersed in a world that you have to make sense of or else you'll feel lost.

My knowledge of the Four Horsemen of the Apocalypse is based on what I've read in the Bible, so imagine my delighted surprise when the ones in this novel were nothing like I pictured them. I love when an author is able to take something or someone that is so etched in the minds of people and present them in a way that you would never have expected at all. And that's what Rhys Ford did with Shi, Ari, Min, and Mal--Death, War, Famine, and Pestilence, respectively. There's so much more to them being the Four Horsemen and this is one of those cases where your preconceived notions are chucked out the window.

This is the kind of book that sucks you in from the beginning and you can't help but become curious and try to figure out what's going on beyond the Veil, regardless of whether you're heading into it or outside of it. I wouldn't say that there's much romance in the story but there is this feeling of love and affection that you get between some of the characters, especially emanating from Death and Ari. The ending is a cliffhanger of sorts, but be reminded that this is the first in a series, and with how everything turned out here, I shall be anxiously waiting the second one. Ink and Shadows is a must-read and gets five stars. ♥