Review: Confessions of a Queen B* by Crista McHugh (The Queen B* #1) 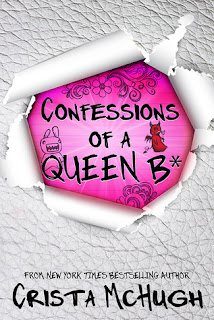 Note: This ARC was provided by CrushStar Multimedia via NetGalley in exchange for an honest review.

Alexis Wyndham is a senior in high school and she's her school's Queen B and doesn't mind it one bit. She has a blog called The Eastline Spy that's been known to put both teachers and students to shame, but Alexis doesn't do it maliciously. She justifies her actions by saying she does it for the members of the student body who don't get the kind of say the popular ones do. She learned the hard way what it's like to have your closest friend betray you and share your deepest secrets with everyone. She has no affection for jocks or cheerleaders who think they own the school, but when she finds herself paired up with the school's star quarterback Brett Pederson, Alexis questions her long-held and deeply felt convictions.

Confessions of a Queen B* is the first book in bestselling author Crista McHugh's young adult series, The Queen B*. I went into the book thinking it was a standalone, but by the time I got to the end, I found myself hoping there was a sequel in the works. Upon checking Goodreads, I realized that there are at least three in the series, so I'm going to keep my fingers crossed and hope that I get the ending that I want by the end of the third book. This first book introduces readers to Alexis Wyndham, Eastline High's Queen B and known for the exposés she does on the teens and adults of the school, exposés that end up as posts on her infamous online blog, The Eastline Spy. She's smart and sassy and knows the kind of power she wields.

Aside from Alexis, we also meet Brett Pederson, Eastline's most popular student and quarterback of the football team. He transferred to the school in their sophomore year, so Alexis' familiarity with him is limited compared to the dirt she has on other jocks, queen bees, and wannabes in Eastline. She has him pegged as the typical dim-witted jock who has the head cheerleader and Alexis' former best friend, now nemesis Summer Hoyt as his girlfriend. But once they end up having to work together on a school project, Alexis begins to see the real Brett, realizing that she may have been very wrong about him. He even has her thinking twice about her actions when it comes to being the Queen B as he helps her solve a mystery.

This was a cute story with equal parts sweet and snark and Alexis was a likable female lead who was an outsider slash insider who begins her reign as Queen B wanting to right wrongs but lets some of that power get into her head at times. There's also a lot more to Brett than being the star athlete and student and I hope that the two future installments will delve into his character even more. Other supporting characters were memorable--Alexis' best friends, Richard Wang and Morgan (whose last name I don't recall being mentioned, as well as Summer--and I'm curious to see if whether or not Gavin will return and wreak havoc on Alexis' friendship with Morgan. Confessions of a Queen B* gets four out of five stars. ♥

Purchase Confessions of a Queen B* on Amazon | B&N | Kobo.