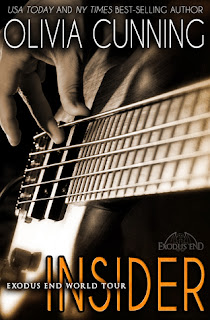 Note: This ebook was provided by Vulpine Press via NetGalley in exchange for an honest review.

Insider is the first book in the new Exodus End spin-off series from bestselling author Olivia Cunning, known for her two other rock romance series, Sinners on Tour and One Night with Sole Regret, both of which I've enjoyed reading. Book one is about Exodus End's bassist, Logan Schmidt, and a journalist, Toni Nichols, tasked to write an interactive biography on the band. I was initially overwhelmed by the sheer number of pages that I was faced with when I opened the book on my tablet but I decided to stick with it and I'm glad that I did because Olivia Cunning did what she does best: bring together two seemingly unlikely characters--one is required to be a rock star--and have them fall for one another in the midst of the madness and mayhem of the world of music.

You wouldn't think that rock stars would be all that comfortable opening themselves up to a journalist but it seems that Toni Nichols didn't have too difficult of a time endearing herself and gaining a fair amount of trust from the members of Exodus End, especially when it came to bassist Logan Schmidt. Toni is all kinds of awkwardness and naivete while Logan could give a class on how to seduce a woman while making her laugh and leaving her with a smile on her face. Toni is, oftentimes, ridiculously innocent and there were a number of things she said and did that made me embarrassed for her. It's one thing to be a virgin at twenty-five but a completely different thing to act as if you've never encountered the outside world in that quarter of a century you've been roaming the earth.

Logan was a hoot, passing off what he and Toni had as nothing more than a friendship (with benefits) because he was rather clueless or simply refused to be clued in on what was actually going on. The fact that there was insta-lust going on didn't surprise me, but I certainly wasn't expecting Logan's need to constantly be around Toni and getting it on every single time he could with her. Still, I liked how he was trying to feel his way through the whole transition from him being a manwhore to a guy who wanted to be with only one girl. He was silly but sweet and all that was lacking with his being territorial was have "Logan's Girl" tattooed on Toni's forehead. His jealousy was toeing the line between sigh-worthy and simply insane, but hey, it was a new experience for him.

Aside from the Toni-Logan romance, the interactions both characters had with the rest of Exodus End was a mix of drama and comedy and definitely sparked my interest so that I'm itching to read the next four books in the series. Members of Sinners also show up, so it was nice to see where those guys and their better halves are at in terms of their relationships. Trey Mills has a more prominent supporting role because of the fact he's the older brother of Dare Mills and he's a relationship with Reagan Elliott, which is the subject of the second book in the series, Outsider. With my curiosity piqued, this first book did a good job in giving me a rock romance with a heck of a lot steam and just enough humor and angst to keep me entertained. I'm giving Insider four out of five stars. ♥