Review: Rules for Dating Your Ex by Piper Rayne (The Baileys #9) 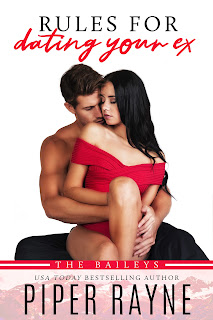 I walk down the bleachers to the fence line. "Your heart is on that field."

He follows me, his footsteps so much louder than my own. "My heart is right here." He presses his hand to my chest. "My heart is always with you."


I have been both looking forward to and dreading this day because the release of Rules for Dating Your Ex marks the end of one of my all-time favorite series, The Baileys. For the record, there IS a novella that will be published after this ninth and final full-length novel, but for all intents and purposes, this newest book features the last among the Bailey siblings to reclaim her happily-ever-after. Why reclaim? Well, this is a second-chance romance, and if you're familiar with the series and have read all the previous books, then you should know main characters Sedona Bailey and Jamieson Ferguson and the evolution of their relationship through the years. Now, if you're new to the series (insert me giving you the side eye here), I guess you could read this as a standalone, but I do highly recommend you read all the books in order.

How does a girl born and raised in Lake Starlight, Alaska find and fall in love with a football-playing Scottish hottie? Well, when the Scot is an exchange student, of course, and that's exactly what happened to Sedona Bailey and Jamieson Ferguson when they were both seventeen. She was a reporter for the school paper and he was the gifted football (aka soccer in the U.S.) student-athlete from Scotland that she was interviewing. From there, they became friends and then more. When college took her to New York and football led him to Europe, the ties that bound them together could not be severed. But when Jamie's life implodes, Sedona knows she can no longer be there to witness the aftermath--not when she was carrying their daughter. A year and a half later, Jamie arrives in Lake Starlight in hopes of getting his family back, but does Sedona being pregnant with someone else's child mean he has lost his chance?

And just like that, I've found the third Baileys novel that rounds out my three top favorites in the series. Talk about having all of my expectations surpassed! I know that the official blurb and my own brief description of the book may have you already full of questions, but you'll get your answers once you read Sedona and Jamieson's story! I so empathized with these two, especially after everything they'd been through. I respect them for making choices that they believed was best, not just for the two of them, but for daughter, Palmer. I appreciated the fact that Jamie truly did have to earn Sedona's forgiveness and regain her trust. He wasn't a bad person; he simply dealt with his lot in life in a way that was not healthy. I loved how protective yet understanding the rest of the Baileys were of Sedona, Jamie, AND Palmer. The revelation of who's been behind the Buzz Wheel wasn't a surprise, but what happens after was! I'm going to miss the Baileys, but there's still a lot to look forward to in Alaska. Just saying. Thank you to Piper Rayne for such an awesome series (and everything else to come!!!). Five-plus stars go to Rules for Dating Your Ex.