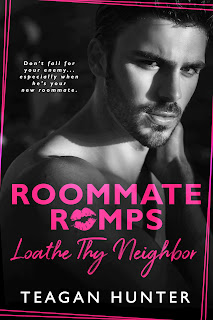 Note: An advanced reader copy (ARC) was provided by the author via Wildfire Marketing Solutions.
I always get this weird, anxious feeling when a favorite go-to author launches a new series. Will it be as good as the one before it? Will I become as emotionally invested? You get the picture. So, when Teagan Hunter announced her new series, Roommate Romps, I was excited but also nervous, which was why a lot was riding on its series starter. Loathe Thy Neighbor is a hilarious enemies-to-lovers story about next-door neighbors who heavily dislike each other for one convoluted reason or another...or do they? Did I mention there's an emotional support turtle named Leo and a teacher-hating cat named Morris that are a part of the cast of characters? Are you curious yet? Well, read on, folks...
Loathe Thy Neighbor is about two twenty-eight-year-olds who happen to live next to each other, but there was no lost between them. River White has worked hard to make boutique a success, and Dean Evans loves being a teacher helping mold young minds. They happen to adore the same boy--Sam West--who is the only son of River's best friend, making him her pseudo-nephew, and was Dean's student the school year before. But that's all River and Dean have in common, unless you count the fact that they loathe each other. But when Dean inadvertently causes a kitchen fire in his apartment, River shockingly offers her extra room to him. Maybe living together will show them that maybe they won't be able to live without one another... if they don't kill each other first.
Ah, the sexual tension was strong with these two. There was a whole lot of denial because, hello, how could they ever admit that they were crushing on the one person they couldn't stand being around? River and Dean are the poster children for the proverbial thin line between love and hate. Yes, they had their supposed reasons, but to quote Shakespeare's Hamlet, "The lady (and dirty gentleman) doth protest too much, methinks." Teagan Hunter does the enemies-to-lovers trope proud, AND she absolutely rocked all those slow-burn feels. The humor was there, as was the romance, and there was even a pinch of angst (which made me a very happy angst-addicted camper, thank you very much). There are also a number of supporting characters that I'm hoping we'll be getting more of as the Roommate Romps series continues on. Five stars for Loathe Thy Neighbor.
Release Date: 17 September 2020 16 September 2020 (early release)
Date Read: 16 September 2020
Learn more about Teagan Hunter.
Purchase Loathe Thy Neighbor on Amazon.