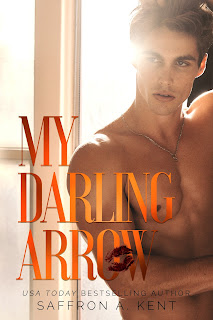 "See? You won't have to be without me. I'm your girl. Now and forever. Your needy, crazy girlfriend and you're my perfect, idiot boyfriend."

I love when an author starts off a new series strong, as is the case with Saffron A. Kent's St. Mary's Rebels series. If you're familiar with Kent's writing, then you'll get it when I say that My Darling Arrow is quintessentially her. We've got a Kent-styled love trifecta: unrequited love, doomed love, and forbidden love, and it's all centered around one couple--or not really a couple...until later...maybe. Yeah, I'm being evasive on purpose because I refuse to spoil this series starter for anyone. Basically, we have Salem Salinger, our strong-willed, big-hearted, and selfless female main charcter, and Arrow Carlisle, the eponymous male main character of the book. Salem is only ten when she meets fifteen-year-old Arrow, and from that time forward, her heart belongs solely to him. Unfortuantely, Arrow falls in love with someone else--Salem's older sister--and for years, she pines for him while his world revolves around her sister and his truest love, soccer. So, what happens when a now-eighteen-year-old Salem is shipped off to St. Mary's School for Troubled Teenagers. It's a reform school--the same one a now-twenty-three-year-old Arrow happens to be the new soccer coach at. And Salem? She plays on that soccer team.
For the record: There is NO cheating that occurs in this story as far as the main characters, Salem and Arrow, are concerned. That's not me trying to be spoiler-y; it's more of me putting that tidbit out there because while there's the whole love trifecta--unrequited, doomed, and forbidden--cheating has nothing to do with it. I mean, seriously, once you get to know Salem, you'll realize why the idea of her becoming involved in one way or another when it comes to cheating would be ludicrous. She loves with all her heart and loyalty matters to her. Putting herself last was something she did because that was the kind of person she was--putting everyone's happiness ahead of her own. Inasmuch as she loved Arrow, she also loved her sister. Speaking of Arrow, well, let's just say that the guy goes through his own evolution of sorts. I can't tell you why, but suffice it to say that anyone who went through what he did would get it. I liked these two together, and I loved seeing how their ties to one another were loose then became tangled and somewhat twisted. Now, I know some readers mentioned how Arrow could have fallen for the older sister first, and why not Salem. Umm, in their case, age wasn't just a number. Salem was ten and he was fifteen when they first met--and when Salem's whole obsession with him began. So yeah, forgive the guy for falling for someone the same age as him and not noticing the younger sister who was a preteen. Okay, shutting up now. Go read the book already and fall for My Darling Arrow and his sweetheart, Salem. Five-plus stars.
Date Read: 18 September 2020
Learn more about Saffron A. Kent.
Purchase My Darling Arrow on Amazon.