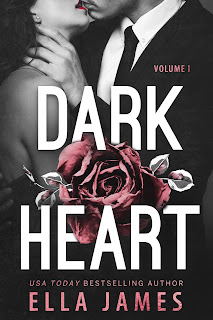 Note: An advanced reader copy (ARC) was provided by the author via Candi Kane PR.
Ella James is back with her much awaited first volume in her Dark Heart duet, and if the second volume is as good as this one, then this could very well give my favorite read from the author--her On My Knees duet--a run for its money. Volume one introduces readers to Luca Galante and Elise O'Hara. There was once a time when these two shared the kind of love that was filled with promises and hope for a future where all that mattered was that they were together. But choices were made--ones out of necessity, knowing that had there been a better, less heartrending alternative, it would have been made. Lies and secrets abound, but the one truth that remains is that Luca's heart has and always will belong to no one else but Elise, no matter how dark it may turn out to be. But will he still be able to protect her from their worst enemies--and in doing so, what will it ultimately cost them?
Ah, this book had that deliciously dark romance feel to it, with a fine balance of suspense and romance. Luca was so much more than I had been expecting. He's not domineering, but he's got this quiet yet undeniably dominating presence that's difficult to look away from. And when the guy was in, he was ALL in. Think fully invested, but he was none more invested than in Elise. Le sigh. These two were made for each other, but nothing comes easily for them, but then isn't that par for the course when it comes to matters of the heart? The thing with Luca and Elise is that those matters are further complicated because of who they are and the fact that so many eyes are on them. Ella James has given her readers all the feels with this book, but it's only the first, and I'm already super antsy to find out what awaits this couple in volume two. Five stars for Dark Heart Volume One.
Release Date: 23 September 2020
Date Read: 23 September 2020
Learn more about Ella James.
Purchase Dark Heart on Amazon.