Review: Falling into You by A.L. Jackson (Falling Stars #3) 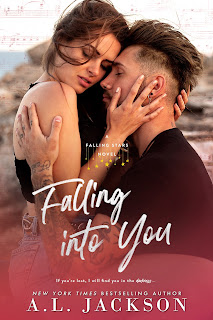 "Are you okay?" It raked from my throat. Barbs and thorns. "Tell me who did this to you."

"Why are you here?" she asked instead of answering.

I kept brushing my fingers tenderly through her hair. "Because I don't know how to be where you are not."

There are romance novels, and then there are romance novels penned by A.L. Jackson. I swear, the woman was born to write romance, and the fact that she happens to be a genius when it comes to angst makes me a very happy camper. From the moment I read Pulled almost a decade ago, I've been hooked on this author's writing, and for very good reason. Now, she's released the third novel in her Falling Stars series, and it's every bit the angsty, heartrending, and inspiring romance that I expected it to be. Like the first two books, Falling into You can be read as a standalone, BUT this is where I'm going to recommend you check out those aforementioned books--Kiss the Stars and Catch Me When I Fall--not only because they're amazing reads, but because there are recurring characters and some back stories that are connected in one form or another to what happens in Richard Ramsey and Violeta Marin's own story.
Carolina George is on the cusp of finally making it big, what with signing with one of the most prestigious record labels around. Richard Ramsey and the rest of the band have worked hard to get to this point, hurdling challenges back and forth. They left their hometown behind six years ago, but it wasn't just the place that Richard turned his back on. His bruised and battered heart remains there, but he believed that leaving was the only choice he had--that in doing so, he would protect those who mattered most, especially Violeta Marin. Pushing her away may have broken her heart, but it shattered his as well, but it was a necessary thing to do. He never thought he'd have to go back, but with his sister, Emily's, wedding on the horizon, he returns and seeing Violet again was inevitable, especially given how close she was to Emily. Letting go once was hard enough, but will holding on to her lead to absolute destruction?
From the moment I first came across Richard while listening to the Audible Original production of Catch Me When I Fall, which I thought was the series starter since it was released prior to Kiss the Stars, I wanted to see why the guy was the way he was. Yes, he was protective of his younger sister, Emily, and the success of Carolina George was of utmost priority, but there was always something about him that gave me pause. Well, now readers finally get his story, and goodness, but it was a heartbreaking one, and not just for him but for Violet, too. Second chance romances need to tick off certain boxes for it, and this one most certainly ticked off every single one. A.L. Jackson weaved together a moving romance about love and family as well as redemption and absolution while tackling heavier subject matters, and Jackson does so with a whole lot of heart (and heat as well!). Five-plus stars for Falling into You.
-------------------------

Kiss the Stars (book one) - five-plus stars - My Review

Purchase Falling into You on Amazon.