Review: The Ice in Our Hearts by BC Powell 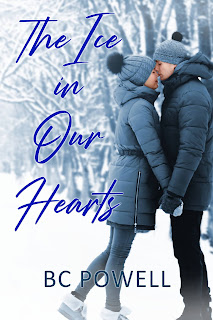 Note: A review copy was provided by the author via Xpresso Book Tours.
The Ice in Our Hearts is a young adult story with romantic elements, and it's set during the Winter Olympics in Beijing, China. BC Powell is a new-to-me author and while he's written fantasy novels in the past, this book is his first foray in the YA romance genre. This is the story of two teenagers--seventeen-year-old Bryce McAllister, a snowboarder from Mammoth Lakes, California, and sixteen-year-old Daria Ilyasova, a figure skater from Moscow, Russia. They're from two different cultures and while both have supportive parents, Bryce's home life is far more comfortable than Daria's. Neither one had ever heard of the other until the land on the same list of noteworthy teen Olympians, and several DMs later, Bryce and Daria agree to meet during the Games. But with the pressure to win gold, toxic rivalries, and health issues, will falling in love complicate everything even further or could it inspire these young athletes to even greater heights?
I was quite impressed with this YA read! It was crystal clear that BC Powell did his research and he did it well. The blurb makes mention that he does have a child who has type 1 diabetes, also known as juvenile diabetes, and that first-hand experience shows. Not only does Powell show that he's done his due diligence when it comes to T1D, but the same can be said for the sports the main characters engage in--competitive snowboarding and figure skating, which just happen to be two winter sports that I enjoy watching and not just during the Olympics. I appreciated how detailed the author was, allowing me to not only picture what was happening as Bryce and Daria competed, but also with the necessary routine that Bryce would have to go through trying to manage his T1D. The romance itself was quite sweet, with that innocence and curiosity that comes with teenage crushes and first loves. The ending was one that was filled with hope for forever.
Where the book falters, however, is in the presentation of the story. It's told from multiple third person perspectives, and the shift from one viewpoint to another would be without warning. So much would be going on at times, and while picturing it all in my head wasn't a hardship, this felt less like a book and more like a script but without the structured form of an actual script. The story itself was both an endearing and an inspiring one, and the main characters truly did come off as teenagers who were dealing with a whole different set of challenges atop the usual ones that their peers go through. The supporting characters were all interesting and notable as well, with no real villains, save for one who turned out to be more of a misunderstood girl lashing out. So, all things considered, I'm giving the YA read that is The Ice in Our Hearts four stars out of five stars.
Date Read: 26 September 2020
Learn more about BC Powell.
Purchase The Ice in Our Hearts on Amazon.