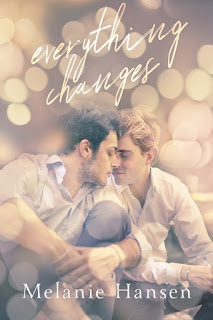 Jase planted himself in front of him. "I love you, goddammit," he said fiercely. "I want to build a future withyou. Doesn't that mean anything?"

I read the first edition of Everything Changes back in 2016 in preparation to read and review the third novel in the Resilient Love series, which were originally published through Dreamspinner Press. This would be my introduction to Melanie Hansen's writing, and suffice it to say that I was hooked, going on to read the entirety of the series, as well as all her published books afterwards--Love and the Exorcism (also from Dreamspinner Press), the Spectrum Nights series (from NineStar Press), Point of Contact (from Carina Press and now a companion novel to Everything Changes, but more on that later), and the Loving a Warrior series (also from Carina Press). Hansen has re-released her Resilient Love series starter, having reworked the story, this time tying it with her standalone, Point of Contact. That being said, you don't necessarily need to read Point of Contact in order to fully understand or enjoy Everything Changes, but if you have read the original version of this book, I highly recommend you check out this new second edition.
Everything Changes is a friends-to-lovers M/M romance between two battle buddies who become the best of friends during and after their deployment. Jason DeSantis was a medic in the Marine Corps and Carey Everett, also a Marine. The two become close when Carey becomes Jase's roommate at their barracks, but it's during a devastating ambush that their bond is further cemented. Carey lost part of one leg, but after all his struggles, he's found his purpose, driving him to be better and to help others like him. Jase is the most important person in his life, but while it may seem like everything is okay with his best friend, even having a possible recording contract with his band within reach, the former platoon medic isn't being forthcoming with his own struggles. During Carey's vacation, their friendship evolves into something more, but the fact that Jase lives in San Diego and Carey in Colorado is just one of the hurdles before them. How can they have any sort of future together if one doesn't fully trust the other to bare all of his demons?
The original edition of Everything Changes left one heck of an impression on me four and a half years ago, but this second edition feels like a step above what was already an amazing read. This book gave me all the feels and then some. My heart broke for Carey and Jase as much as it thumped happily in my chest when they seemed to make progress in their evolving relationship and, of course, at the end. But believe me, the road to that happily-ever-after was not smoothly paved nor free of potholes and hurdles. What made this such a moving and inspiring story was that nothing was sugarcoated. Yes, Carey had overcome a great deal, but there were still those expected moments of people seeing the missing limb and making assumptions or treating him as if it wasn't just a limb that was missing but Carey as a whole. And Jase... Ah, Jase, how I wanted to give the guy a hug more than once. When he shares his heaviest of burdens, I couldn't help but shed a few tears. Everything Changes is, indeed, a story of resilience and love and gets five-plus stars.
Re-Release Date: 14 September 2020
Date Read: 14 September 2020
Learn more about Melanie Hansen.
Purchase Everything Changes on Amazon.