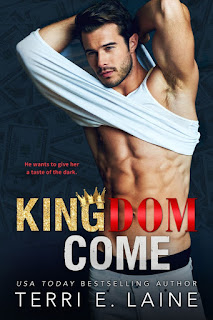 Note: An advanced reader copy (ARC) was provided by the author via Wildfire Marketing Solutions.
It's been a good, long while since I last read something written by Terri E. Laine, and thinking back, I can't possibly give you a good enough reason why that was so. Well, what matters now is that I'm getting all reacquainted with her writing, and it's by way of Kingdom Come, the first book in a new duet. This is supposed to be a spin-off of Laine's King Maker trilogy, but even though I've yet to read said trilogy, I was still able to enjoy this new book and not feel like I was missing anything integral to the characters or story.
Elizabeth Monroe knows how it's like to be the nice girl--the one who lives in the straight and narrow and behaves appropriately. Well, she's been itching to take a trip on the naughty side, and it looks like she's found just the guy to take that trip with her. The hot guy named Striker is an irresistible combination of male model and bad biker, and he's every bit her type. However, Lizzy isn't his. Not only that, but he isn't in the market for any sort of relationship. Yet, the temptation each represents is difficult to resist, and when everything is said and done, will either be able to walk away with hearts intact?
Talk about a reminder of everything I've been missing since I last read something of Terri E. Laine's! This book was hotter than I'd anticipated, which made me wonder if it's just this duet (and the preceding trilogy that it's spun off of) that has the heat factor dialed up because I honestly don't recall my previous reads of her being as hot as this one was. I also loved how Lizzy gave Striker (aka Connor King) a run for his money. He may like calling her princess, but she isn't some meek girl who does what she's told and is waiting for some knight in shining armor. Nope, this woman wants the biker on a gleaming motorcycle instead. Can I have book two now, please? Five stars all go to Kingdom Come.
Release Date: 30 September 2020
Date Read: 30 September 2020
Learn more about Terri E. Laine.
Purchase Kingdom Come on Amazon.