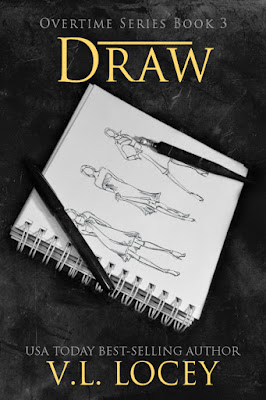 About Draw
They say first loves never last. Jackie Blue Kalinski was about to show them—whoever they are—that the word never is not in his vocabulary.
From the time Jack Kalinski was a preschooler he had a good sense of who he was and where he wanted to go in life. His childhood was spent drawing beautiful dresses for pretty people, male and female alike. Growing up with two dads who played hockey wasn’t exactly conducive to late night talks about tulle or tailor’s chalk, but he never let that stop his dreams of becoming a fashion designer or expressing the genderqueer heart that beat in his chest. His family’s love and support helped him through some painful losses that shaped him into the strong, vivacious, and charismatic college student he is today. Life hasn’t been a smooth ride, but Jack has persevered and is about to take the fashion world by storm.
Little does he suspect that his tidy life is about to be scorched by a chance meeting with one of the men playing hockey on the gay team his father coaches. Martin McKittrick not only catches Jack’s eye, but the much older man wins his heart. The passionate affair with the captain of the Marine Unit of the BFD burns red hot until the new couple run into a few snags that might dampen the inferno: Jack’s ascent into the fashion world, Martin’s job and the inherent dangers that come with it, and the fact that the well-kept secret romance has just been exposed to the world in a rather big way.