Review: Shot in the Dark by Marie James (Blackbridge Security #2) 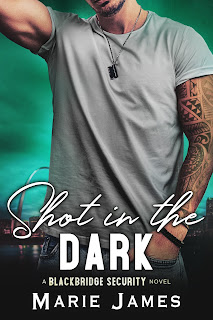 Note: An advanced reader copy (ARC) was provided by the author via Wildfire Marketing Solutions.
Oh, my. This book came with a disclaimer, and there was already pretty much a hint of what the male main character was up to in the first Blackbridge Security book, but I must admit that I was taken aback by just how far he went in order to, erm, get to know the female main character...before he even met her in person. So, okay, Shot in the Dark is the second book in Marie James's Blackbridge Security series, and twenty-six-year-old Wren Nelson, Blackbridge's resident internet technology expert, had already begun his snooping around in the series starter. When he accidentally received a certain "special package" meant for someone else in his apartment complex, his curiosity gets the better of him. He digs into twenty-four-year-old Whitney Nelson's background, and one glimpse of her and Wren finds himself digging deeper and deeper until he feels like he knows the woman. He struggles to take the next step and introduce himself to her in person, but maybe reaching out to her online will be better than nothing. What Wren may realize soon enough, though, is that Whitney could turn out to be his everything...and then some.
I liked Wren in Hostile Territory. He was witty and damn good at his job. Add to that the fact that he had a pet named Puff Daddy who was snarky and sassy and a truly fine feathered sidekick. It was clear that his curiosity was piqued when he received the package that was supposed to go to Whitney, and now in this second Blackbridge Security book--HIS book--it was clear that he'd fallen into the proverbial rabbit hole. Let's call a spade a spade, or in Wren's case, let's call a stalker a stalker. Yep, totally not sugarcoating it. I know that Marie James gives her readers a heads-up via a disclaimer at the very beginning of the book, but even knowing all that, Wren's machinations came off as a wee bit--a whole lot--creeptastic. Hats off to James for the inclusion of a bit of kink--i.e. mild BDSM--even if it did come off as out of the blue in the beginning, as well as other elements, such as suspense and humor. While Wren was obsessively encroaching on Whitney's privacy gave me pause--and a long one at that--and I would have really wanted more character development when it came to both main characters, there was still a lot to like about Shot in the Dark as a whole, which is why I still enjoyed myself and look forward to seeing what could be waiting for everyone in Blackbridge Security. 3.5 stars.
-------------------------
Read my reviews for the Blackbridge Security series: