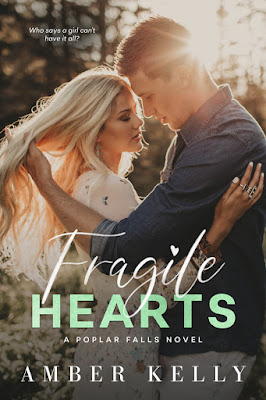 About Fragile Hearts
Who says a girl can’t have it all?

I had my life and career all planned out. That was until I was betrayed by someone I trusted and my perfect opportunity was stolen from underneath my nose.

So here I am, back on Stoneyridge Ranch in Poplar Falls licking my wounds. I love being home with my family and friends, but I am determined to move past my anger and build my career. I have goals and plans too big for my hometown.

When Brandt Haralson, the new vet in town, offered me a job, it was the perfect opportunity for me to plan my next move and get some experience. He’s brilliant, driven and sexy as sin, but he is also not interested in getting involved with anyone. I can learn a lot from him and I don’t have to worry about any romantic engagement.

You know what they say about the best laid plans. When an attraction builds to the point of boiling and walls start to come tumbling down, can I stick to my plan or will I discover that everything I ever wanted was right here after all? 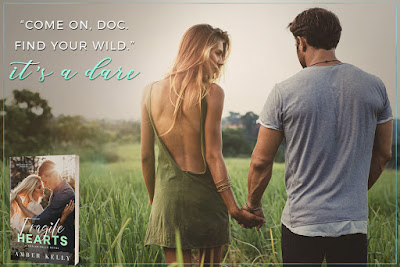 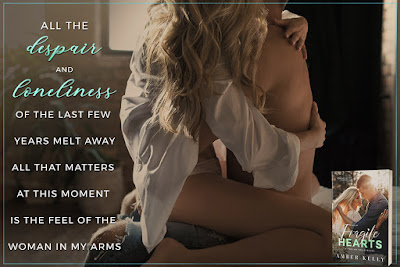 An Excerpt from Fragile Hearts
We close down the bar before paying our tabs and wrangling the girls out to the parking lot. They're swaying as they cling to each other, singing off-key. Walker tries to gently untangle their limbs but Elle pulls them in tighter.

“I love you guys. Don’t you worry about that SOB from Ohio, Bells. We’ll find you a real man.”

“Yeah,” Sonia agrees, as she stumbles and Foster reaches out to keep her from falling on her ass.

A black sedan pulls in and she rights herself.

“That’s my ride,” she says as she breaks off and makes her way toward the vehicle listing sideways.

“Are you kidding me?” Walker mumbles as he catches up to her and guides her to the passenger door. He opens it, and helps her in as she waves and blows kisses back to the girls.

Once she is in and the door closes behind her, the car peels off in a cloud of dust.

Walker throws his hand in the air.

“You’re welcome for helping your wife into the car douchebag,” he calls after the taillights.

Elle and Bellamy are still holding on to each other, with Foster keeping them steady.

“Come on baby, let’s get you home,” Walker beckons to Elle.

“I guess that means you’re on my couch tonight, honey,” Payne says, as he slaps Foster’s back.

“I expect breakfast in the morning, dear,” Foster quips.

“I have to drop Bellamy off and I’ll be right behind you.”

She looks up at me.

“I mean, it’s on the way to town. That way you don’t have to backtrack,” I clarify.

“It’s okay by me if it’s okay with you, Bells,” Foster puts the ball in her court.

“Works for me,” she says before taking off for my truck.

“Glad you came out tonight, Doc,” Payne says before offering me his hand.

I shake it and then Foster’s.

Walker shouts his goodbye from his truck and I join Bellamy in mine.

She’s kicked her boots to the floorboard and her feet are on the dash and she's focused on the radio. She has one eye closed and her tongue out in concentration as she turns all the knobs.

“It works better once I start the engine,” I tease her and she looks up.

“That’s what the problem is.” She giggles.

“You’re an adorable drunk,” I tell her.

“You’re an adorable sober, Doc,” she says on a hiccup.

“I have a great idea, let’s get donuts,” she blurts out.

“Donuts? It’s two in the morning. I don’t think there are any donut shops open at this hour,” I tell her and her face falls.

“Tell you what,” I lean in and whisper.

She focuses her eyes on me and leans in too.

“I promise to bring you some donuts to the office in the morning.”

“Oh my goodness, I have to work in the morning. And my boss knows I’ve been out late drinking,” she says as her eyes widen.

“I think he’ll give you a pass this time.”

“Whew, thank goodness, if I was still on ranch duty, Pop would probably make me sling manure till I puked.”

That makes me bark out a laugh.

“Let’s get you home so you can sleep it off before it's time to clock in.”

“Okay,” she says before a yawn escapes and she closes her eyes. By the time we make it to Stoney Ridge, she's fast asleep.

I pull up the drive slowly and leave the engine running as I round the front of the truck and open her door. I try to wake her, but she mumbles something incoherent and pulls her legs into a ball under her.

I wrap an arm under her, gently lifting her as she sighs, and leans into me. I move her to get a better grip around her waist and feed my other arm under her legs to lift her from the truck. The front porch light blinks on and Winston Wilson steps out. He stands and waits as I make my way carefully to him, while holding a sleeping Bellamy close to my chest.

“I’m sorry we woke you,” I apologize as I climb the steps.

“You didn’t, it’s the darnest thing. I know she’s grown but I can’t fall off until I know she’s tucked safely in her bed,” he says as we make it to him and he opens his arms to take her weight from me.

She stirs as I transfer her to your father's embrace.

He laughs quietly, as her eyes drift back closed and her breath evens out.

“She would randomly ask for donuts when she was little. At night before bed, during her riding lessons, at church, while the Reverend was in the middle of his sermon. Silly baby. She’ll always be my baby girl. Whether she’s twenty-five, thirty-five, and even when she’s sixty-five. I’ll worry and carry her as long as I’m able. Or until the Lord sends someone else to do the job for me.”

A parent’s love is powerful.

“I don’t mind at all, son. I’m glad she had a good night. Her mother tells me it’s been a rough week for her.”

“Thank you for making sure she got home safe.”

“My pleasure,” I reply as I smile down at her. She looks like an angel in her daddy’s arms.

He clears his throat.

I turn and hurry to the truck, plucking her discarded boots from the floorboard and take them back. Winston has already carried Bellamy in and made his way back to the door. I hand him her boots.

“Good night, Doc. We’ll see you tomorrow,” he bids me farewell and I make my way home.

It was a fun night. I can’t remember the last time I actually went out and enjoyed myself.

When I make it to my apartment I take a quick shower and get settled in.

I fall right off to sleep and have a dreamless reprieve until the alarm starts blaring at eight am.

Five uninterrupted hours of rest. I can’t remember the last time that happened either. 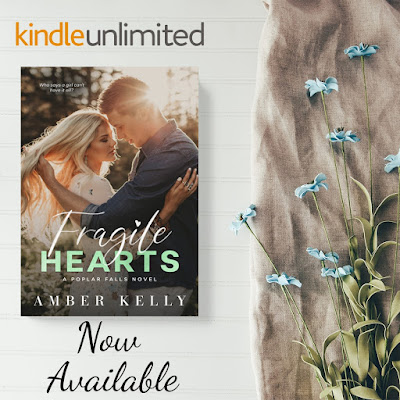 Amber Kelly is a romance author that calls North Carolina home. She has been an avid reader from a young age and you could always find her with her nose in a book completely enthralled in an adventure. With the support of her husband and family, in 2018 she decided to finally give a voice to the stories in her head and her debut novel, Both of Me, was born. 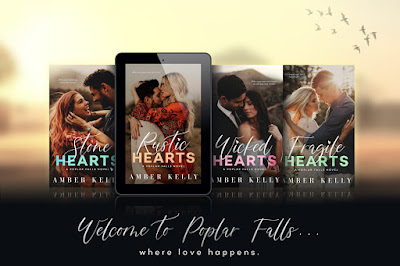