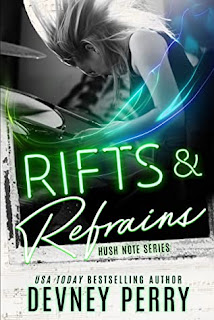 Note: An advanced reader copy (ARC) was provided by the author via Valentine PR.
After as strong a start as Sarina Bowen gave the Hush Note trilogy by way of her Lies & Lullabies novel, expectations were high for the book that would follow, and Devney Perry rose to the challenge. Rifts & Refrains is the second Hush Note story, and while it is part of an interconnected series due to the fact that three of the main characters all belong to the eponymous rock band, each book may be read on its own. However, allow me to gently insist that all three of the stories be read in order--Rebecca Yarros's Muses & Melodies is slated for release next Tuesday!--and I absolutely promise you, you won't regret doing so.
Leaving Montana at eighteen was necessary for Quinn Montgomery. Doing so meant the freedom to live her life free of her father's conservative and confined viewpoint and beliefs, but it also meant leaving behind her family--her parents, siblings, and grandmother--and the boy she loved. After nearly a decade, she's back to honor and say goodbye to her beloved Nan. She'll endure the awkwardness and cold reception from those who were once closest to her. To them, she isn't the celebrated drummer of Hush Note--she's the girl who left them and never looked back. And to Graham Hayes, Quinn is the girl who broke his heart, but then Graham shattered hers all those years ago as well.
I wasn't a huge fan of Quinn's in the first Hush Note book, but Devney Perry has made me see her in a whole new light. This was a great second-chance romance, one that had loads of angst thanks to all those unresolved issues that spurred Quinn on to leave Montana. There's a lot of blame to throw around, but I appreciated how everything was put to rest--although there may have been more focus on her reconciliation with her father and, of course, her erstwhile romance with Graham than her relationship with her mother and less so with her siblings. Colin was a scene-stealer, but then so was Nixon, whose story I am eagerly awaiting. I loved seeing Jonas and Ethan again, too, proving Hush Note truly is family. Rifts & Refrains is a tale of forgiveness, family, love, and music. It gets five stars.
-------------------------
Read my reviews for the Hush Note series: