Review: If He Only Knew by Jennifer Marie 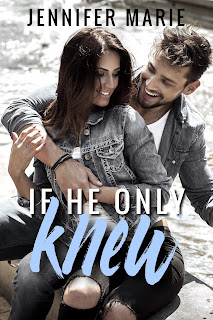 Note: An advanced reader copy (ARC) was provided by the author via Give Me Books Promotions.
Jennifer Marie is a new author and If He Only Knew is her debut novel. This is a young adult (YA) romance with a touch of new adult (NA) to it since one of the main characters does head off to college about a third into the story. Luca Ferraro and Finley O'Brien have been the best of friends ever since they were seven years old and he was the new kid in her class. Over the years, they've only gotten closer, but while their feelings have gone from platonic to romantic, neither one of them has confessed said feelings to the other for fear of destroying their friendship. When one finally works up the courage to admit their love, will distance, college life, and one closely kept secret end up ruining it all anyway?
This book held promise, and I enjoy coming across new authors in hopes that they'll be someone whose writing career I'll want to keep tabs on over the years. I appreciated the story Jennifer Marie wanted to tell, albeit it was a rather too fantastical at times. Take for example the reaction of Finley's mother to what her daughter told her midpoint in the story. I had my eyebrows raised for that one. I also wasn't a fan of the whole keeping something secret from the other main character. I won't say what it was because I don't want to spoil the book for those who have yet to read it, but yeah, that just didn't appeal to me because that sort of information shouldn't be kept and I would have hoped for more guidance from that person's parents. The blurb also felt like two blurbs in one, but that was the least of my quibbles. All things considered, this author is like her story--there's promise, and I hope she continues to hone her craft. 3.5 stars for If He Only Knew.
Release Date: 16 September 2020
Date Read: 15 September 2020
Learn more about Jennifer Marie.
Purchase If He Only Knew on Amazon.