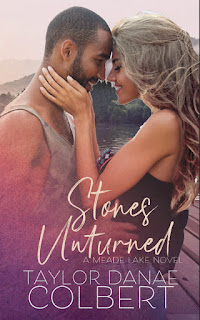 Note: An advanced reader copy (ARC) was provided by the author via Wildfire Marketing Solutions.
After the absolutely amazing beginning to the Meade Lake series, my expectations were high for the follow-up. Back to Shore was such a beautifully-penned romance, and Derrick Thomas was a highly memorable supporting character, so I was excited to see what story Taylor Danae Colbert had for him. Well, that story unfolds in Stones Unturned, the second book in the Meade Lake series. When Derrick sets off for Georgia to find Kaylee Jennings, it was a mission based on hope and luck, and he certainly had both when his path crossed with hers unexpectedly. She's shocked when he tells her that he's been searching for her on behalf of May Dean, Kaylee's maternal grandmother--a grandmother she believed had passed away years ago. Instead, it seems Gran May has been living in Maryland--Meade Lake, to be exact. Derrick invites Kaylee to go with him to Meade Lake, and when she accepts, she has no idea just how much her life will change.
Stones Unturned was a good book, one that had an interesting and timely story about family, love, and race, but it didn't come quite as close as I'd hoped to the expectations that I'd had for it. The best thing about the book had to be its cast of characters, most of whom are familiar faces from the series starter. Now, small towns tend to have quirky townsfolk, and while there were certainly a few in Meade Lake, what was the most notable thing about the ones here was how strong the sense of community was. As I'd expected, Derrick continued to be such a memorable character, only this time, he's the one under the spotlight. But this was truly Kaylee's story, one where we see her transformation from dutiful daughter groomed to take over the family legacy to the headstrong granddaughter who does her Gran May proud. While this may not have reached Back to Shore level, Stones Unturned is still a very commendable 4.5-starred read.
---------------------------
Read my reviews for the Meade Lake series: