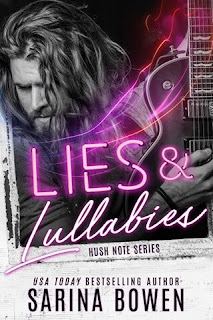 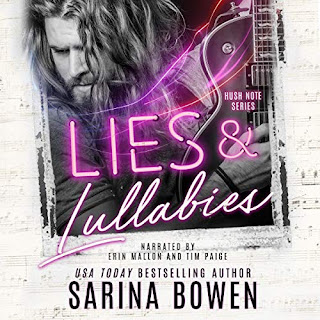 Note: An advanced listener copy (ALC) was provided by the author. The eBook is a personally owned copy.
When it was announced that three of my favorite go-to authors were working together on a series that featured the three members of a world-famous rock band called Hush Note, I wondered for a second if I'd read those names right. After all, Sarina Bowen, Devney Perry, and Rebecca Yarros just happened to be on my list of authors that I wish would join forces to write something, and by that I meant pairing up, as quite a few authors have been doing as of late. Instead, what fans and readers of the three are getting is a series of three interconnected standalones, and I shall happily reap each of the rewards!
Sarina Bowen starts off the Hush Note trilogy with a second-chance romance that had me smiling with satisfaction--and maybe even a song in my heart. (That reference won't click with everyone, but hey, it fits.) Lies & Lullabies is the story of two people who met five years ago and spent a life-changing few weeks over the summer becoming friends--and maybe more if they had simply had more time...or simply taken a chance. So, when thirty-year-old Jonas Smith returns to the tiny town of Nest Lake, Maine, he's hoping he'll be able to recapture that inspiration that led to him writing the kind of songs that led Hush Note to become the multi-platinum, award-winning band it is today. And maybe if he's honest, he's hoping he sees the girl he's never forgotten. Only, when Jonas sees twenty-five-year-old Kira Cassidy, she's got a girl of her own--a five-year-old named Vivi.
This may sound weird, but I need the second chances in my romance novels to be earned, meaning I don't want quick fixes or easily forgiven and forgotten scenarios. There are reasons why a couple don't work out the first time around, and I just happen to be one of those readers who demands explanations and conversations, not merely easy sorries or convenient excuses. And I got the former rather than the latter here, and thank goodness for that! Now, the whole secret baby thing is a whole 'nother matter. Admittedly, I'm not a huge fan of the trope, although I do read it now and then, depending on the author and story line. I got why Kira kept Vivi's existence from Jonas, but yeah, I still wish she hadn't.
As far as the romance is concerned, you won't get any complaints from me. I loved Jonas and Kira together, but I also liked who they were on their own. They were not who I expected them to be, and that's a really good thing because they've surpassed said expectations, turning out to be better versions than I'd hoped for. The supporting cast of characters, wonderfully led by Vivi and followed by Jonas's band mates and best friends--Nixon (guitarist), Quinn (drummer), and Ethan (tour manager)--and Kira's family--Adam (lawyer and older brother) and Mr. Cassidy (father)--stood out but never stole the spotlight, although I loved the chapter with Adam's POV. Tim Paige and Erin Mallon narrating Sarina Bowen's story was the icing atop what was already the proverbial cake I could not get enough of. Talk about perfect casting! I'm giving Lies & Lullabies 4.5 stars. ♥
Release Date: 22 September 2020
Date Listened to: 21 September 2020
Learn more about Sarina Bowen.
Learn more about Erin Mallon and Tim Paige.
Purchase Lies & Lullabies on Amazon | Apple Books | B&N | Kobo.