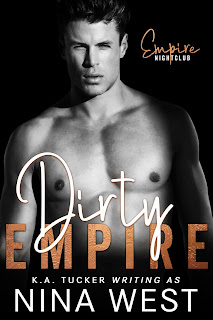 Note: An advanced reader copy (ARC) was provided by the author via Valentine PR & Literary Management.
Dirty Empire is the third book in the series by the same title penned by Nina West, which is a pen name of bestselling author K.A. Tucker's. This was originally supposed to be the one to close out the trilogy, but there's a fourth book due for release in September of 2021, at least according to Amazon. Two things to note: First, this book ends in a cliffhanger, and second, the books in this series MUST be read in order: Sweet Mercy, Gabriel Fallen, and Dirty Empire, with Fallen Empire being the upcoming fourth and final book in 2021.
Gabriel Easton is a man who knows what he wants, and at this point in his life, there are two that he's never wanted more: Mercy Wheeler and his freedom. But breaking free from his legacy is easier said than done, and the ramifications of his actions could lead to blowback if he isn't careful. His feelings for Mercy are evolving, but he also is aware that someone like her would never willingly be with someone like him, wihch is why desperation left her with no other choice but to be with him....but for how much longer?
That thrum of anticipation is ever-present throughout this book, and there were moments where I honestly felt like I was literally on the edge of my seat. Both main characters were at a crossroads, and the choices that they would have to make would leave lasting impacts. I already had an inkling going into this book that it wasn't going to be the series conclusion that I thought it would be, so the cliffhanger ending wasn't too much of a shocker, but the wait is rather long for book four. Dirty Empire gets four stars.
-------------------------

Read my reviews for the Dirty Empire series: