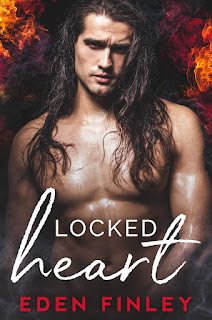 Note: An advanced reader copy (ARC) was provided by the author via Foreword PR & Marketing.
I have something rather embarrassing to confess. When I signed up to read and review Locked Heart, I immediately assumed (yep, I know what they say about people who assume...) that it was the next book in Eden Finley's Famous series. While it IS loosely connected to that series, neither of the main characters is actually connected to the former boy band that the series is about! To make this confession even more embarrassing, I failed to realize straightaway that the "Cash" in the blurb is the same Cash in Spotlight, the second book in the Famous series. So yeah, color me embarrased. All that being said, I did enjoy this novella once I got over my confusion, AND yes, it can be read as an absolute standalone, especially since no one from the Famous series--which I am admittedly obsessed with, but can you honestly blame me?!--is mentioned by name.
Cashton (no middle name) Kingsley and Sherlock Michael Emerson fell in love as teenagers, but they knew they would have to go their separate ways post-graduation. Sherlock would be off to Wharton in Philadelphia and Cashton was heading to Los Angeles to pursue his music career. Breaking up was the right thing to do, but Sherlock did promise that should Cashton make it big and perform at a music festival in Death Valley, they would see each other there again. Ten years later, eight of which were spent with one ghosting the other, Cashton is now Cash, lead singer of world famous Cash Me Outside, and the band's just gotten word that they'll be playing in Death Valley. Everyone's thrilled, but Cash is more anxious than anything else. Will his ex-boyfriend keep his promise, and if he does, what does that mean for the two of them going forward?
This novella was a quick read, but it told a complete story about second chances and how a first love can turn out to be the forever kind. When Cash was introduced in Spotlight, I had a feeling he had a story worth reading, and I was right. There was a bit of disconnect, though, between the Cash from Spotlight and the Cash in the first few chapters of Locked Heart. Maybe it's just me, but then the Cash in my head didn't exactly come anywhere close to the Cash on the cover of the book, but again, it could simply be a "me" thing. Then there was Locke, whose whole ghosting thing had me giving him the proverbial side-eye, so it took me a bit longer to warm up to him, but once I did, I couldn't imagine else being with someone like Cash. And like Cash before him, I really hope Seb gets his own book. Supporting characters who are scene-stealers for the win! Locked Heart snags four stars.
Date Read: 13 September 2020
Learn more about Eden Finley.
Purchase Locked Heart on Amazon.