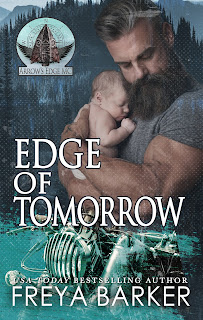 Okay, I may be a wee bit addicted to this series, but if you've read the books, can you really blame me? Freya Barker has main characters who are closer to my age and she's a genius when it comes to weaving together the elements of romance and suspense, making for the sort of story that you want to get lost in. Edge of Tomorrow is the latest novel in Barker's Arrow Edge MC series, and she maintains that same level of excellence that I've come to expect from her writing in general and these books in particular. This is also a standalone, so you could read it completely on its own, but I do highly recommend that you also read the first two novels in the series--Edge of Reason and Edge of Darkness.
The last thing Lisa Rawlings expected at forty was to be the sole guardian for her grandchildren, Ezrah and Kiara, after her daughter died of an overdose. Now forty-six, Lisa has created a home for herself and her now-ten-year-old grandson and six-year-old granddaughter in Durango after the Arrow's Edge motorcycle club rescued them from modern-day slavery. She repays the kindness shown to her by cooking up a storm each day. Lisa is independent and will insist on doing something on her own. Her world revolves around her grandchildren, but fifty-year-old Ernest "Brick" Paver is hoping that she'll allow him to earn his place in their lives. And then life throws them one curve ball after another. One life has already been taken, and Brick refuses for more to follow suit.
I loved the first two books in this series, but this third one? Well, you know what they say about the third time being the charm because this is my favorite Arrow's Edge MC novel so far! This was fast-paced and held my attention from the moment I started reading the first sentence to the time Brick, Lisa, and their family get their happily-ever-after. I totally enjoyed the romance between the two of them, and how nothing was rushed nor taken for granted. They know all too well how devastating one particular loss can be, but these two refuse to wallow in grief, knowing that there are others who rely on them. All three of the children--Ezrah, Kiara, and baby Finn--were integral to the story, and I absolutely appreciated that they weren't used as mere decoration. Freya Barker has proven once again why she has the loyal following that she does with Edge of Tomorrow. Five stars.
-------------------------

Read my reviews for the Arrow's Edge MC series:

Edge of Reason (book one) - five stars - My Review