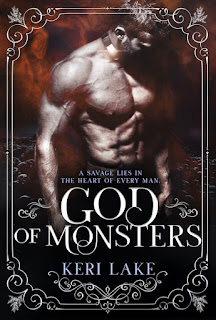 "Believe me, I didn't want to kill him."

"I believe you. It's not who you are. How many times do we have to revisit this?"

I lift my hand, tracing my finger down his hairline and along his temple, over the jagged scar there. "You're not a monster to me."

This! This is the book that I've been so desperately waiting for from Keri Lake, and all these months later, it's proven more than worthy of closing out a series that's left an indelible mark on many that have followed the journeys of each of the unforgettable characters throughout. God of Monsters is the final novel in the Juniper Unraveling quartet, and this is that point in my review where I highly encourage you to read the book in order if you've yet to discover this series. There's a shared journey that the cast of characters goes through even as they go off in different directions as the series developed and evolved. I promise, you will so thank me once you're done reading every single book.
The Alphas were once very much feared, and that fear was stoked by all too real tales of what they were capable of doing and surpassing even the most nightmarish of scenarios anyone could concoct in their scariest imaginations. After all, Alphas were bred for one thing: to kill. But with the fall of Calico, many of them quickly left, hoping to find refuge elsewhere. The hunters became the prey and the world changed once again. Now, the Alphas are gone, with only more stories left in their wake, but then Thalia comes across someone named Titus, Two things become clear: some Alphas remain and the one before her is the god of monsters. Another thing Thalia realizes? She's falling in love with Titus.
Titus and Thalia's story is complex, as were the first three books in the series, but nothing is truly ever simple in this dark dystopian world that Keri Lake has created. Here's the thing though, even amidst all that dreary darkness is a sliver of light that shines through as each of the stories progresses. These two main characters had me anxious, both with their respective back stories and the unknown future that awaited them once their paths intersected. Lake, once again, has weaved the sort of tale that isn't necessarily easy to read. It is, as I mentioned earlier, DARK, so if you're expecting hearts and flowers and glitter all around, this book isn't it. But if you want depth and development and something to truly sink your teeth into, then look no further. God of Monsters may be the end of the Juniper Unraveling series, but what an end it was. This receives five-plus stars.
-------------------------

Read my reviews for the Juniper Unraveling series: