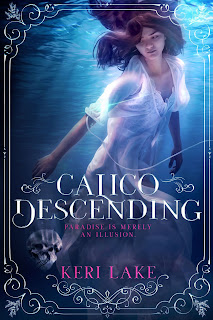 “Nothing in this world is given, only taken, and I fear you'll be taken from me. I have nightmares about it. And there's nothing that would be more painful than losing you.”

He breaks from stargazing to kiss me on the forehead. “It would take all of hell to pull away from you, and the army would have to be exceptional.”

“It is. Legion is the biggest army there is.”

Lifting his head, he guides my eyes to his, until all I want to do is drown in that stormy gray sea. “And they still couldn't keep me from you.”


When Keri Lake announced the upcoming release of Calico Descending, I was giddy with excitement and anxious to see if it would live up to my personal expectations and if it would meet the bar set by its predecessor, Juniper Unraveling. I already knew what Lake was capable of, thanks to my numerous past reads from her, so I was still quite sure that this new novel would not disappoint...AND IT DIDN'T! I'm a voracious romance reader--think multiple books in one day--and I've liked countless ones and loved more than my fair share of the others that have passed through my hands. But then there are the extraordinary stories--the ones that work their way underneath your skin while you're flipping through the pages and then stay with you long after you've closed the book. That's what Juniper Unraveling was for me two years ago; and that is precisely what Calico Descending is for me this year.

At fourteen, Calithea was sold to the men donning black uniforms, and for four years, she thought she was like every other girl who had been sold. If she thought life was bleak and barren out in the Deadlands, it is nothing compared to being in Calico. And then she learns what her true purpose is supposed to be as she meets her Champion, Valdys. He is the most venerated among the Alpha--the one whose reputation has been earned. He is Calico's sole line of defense against the mutations that could very well eradicate what's left of humanity. Cali is meant to be Valdys's reward...and his punishment. Will Cali survive everything that is yet to come while in Calico?

I know that dystopian romances aren't everyone's cup of tea, but I implore those of you who are feeling iffy on this particular sub-genre to give the Juniper Unraveling series an honest shot. Keri Lake has created a world that feels so desolate, yet as the story evolves and Calithea and the cast of characters forge their respective paths, a spark of hope ignites. Cali may have only been eighteen for most of the book, but this young woman had the sort of courage and passion that made her an honest-to-goodness heroine in my eyes. Then there are the Alphas, particularly, Valdys, Cadmus, and Titus, and the other girls, specifically, Roz and Neela, who made their mark throughout the book and in Cali's life. Calico Descending was a heartrending, five-plus-starred read and I can't wait for Cali's story to conclude and to finally learn everyone's fate in the next novel, Kings of Carrion, out in November. ♥

Read my reviews for the Juniper Unraveling series: