Review: Too Good at Goodbyes by RC Boldt 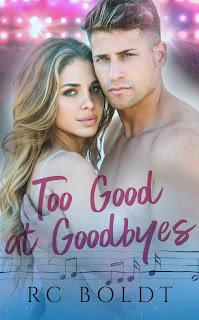 Let me start this review off by stating what will be the obvious as you continue reading the rest of this: I adore RC Boldt's writing. I've read all of her novels, and while I've liked a couple or so, I've loved the rest of them. In short, this author has yet to write a book that I dislike--knock on wood! Her latest novel is a standalone yet also a spin-off of sorts. If you're familiar with Boldt's previous work, then Kane Windham should be pretty familiar, what with him being a supporting character in a couple of books. That doesn't mean, however, that readers who are new to the author will have to go and read those before diving into this new book. Too Good at Goodbyes is very much a standalone and works well as one, although it would be remiss of me not to encourage you to read Boldt's Out of books--Out of Love and Out of Ashes--because those were wonderful reads. Heck, just go read her entire back list!

Too Good at Goodbyes is the story of a singer and her bodyguard who develop feelings for each other. Simone King is pop music royalty, although her moniker of "Ice Princess of Pop" isn't all that flattering. She may know what it's like to be at the top of the charts and receive accolades and awards for her music, but she's yet to achieve any sort of success when it comes to her personal life. The last thing she expects is to be drawn to her temporary head of security. Over the span of three months, Kane Windham is supposed to ensure security protocol is in place and that he's ready and able to protect Simone from anything and everything untoward that comes her way, but as their feelings develop, will Kane stand in the way of their love and end up saying goodbye to their future together?

Simone was such a wonderful revelation in this book. There was so much more to her than being a pop star thought to have an ice princess persona. I know some reviews have compared her to Taylor Swift, but it's difficult to do that when what is known about Swift is mostly just surface and confirming what's true or not isn't always possible. I'd like to think of Simone as being her own person, and she's seen both the highs and lows in life yet doesn't bemoan her circumstances. As far as Kane is concerned, well, let's just say we were good until he did what he did and it had me wanting to smack him upside the head a time or ten. Not to mention his constant texting afterwards made me think of him as being a wee bit selfish, not fully considering how difficult it would be for Simone to receive the texts, choosing to think instead that it made him feel closer to her. Argh! That being said, he did redeem himself, and the epilogue was spot-on! Fact or fiction: Too Good at Goodbyes is a five-star read. FACT! ♥