Review: The Wallace Girl & The Sinclair Heir by Eliot Scott (The Feud #1-#2) 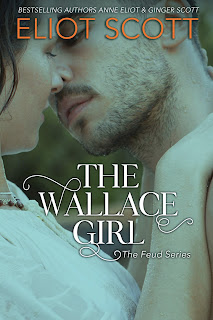 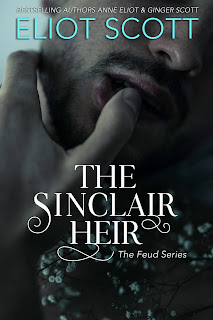 Bestselling authors Anne Eliot and Ginger Scott have joined creative forces to write The Feud duet, which is penned under their pen name of Eliot Scott. I've only read Ginger Scott's writing, so this duology is kinda-sorta an introduction to Anne Eliot's writing, even though I would suspect that her writing as a solo author is a tad different than as a duo. This review will cover the duet as a whole rather than the two books--The Wallace Girl and The Sinclair Heir--separately. These MUST be read in order, what with book one ending in a cliffhanger, and you're going to need the back story which plays out in the first book so that all the events in the second book make sense.

Josephine Annabelle Wallace and Alexander Robert Sinclair were friends as children, but their feelings grew into far more. When they were together, she was just Jojo and he was just Alex, but to everyone else, she was the Wallace girl and he was the Sinclair heir, and everyone knew that a Wallace and a Sinclair were never to meant to be--not when there was a generations-long feud that stood between them. Jojo believed that their love could overcome it all, but it got to the point where even that wasn't enough to save Alex or their relationship. Years pass, but she's still a Wallace and he's still a Sinclair. What'll it take for their families' bitter feud to truly come to an end?

This duet has me at a loss of sorts. Going into it, I had high hopes, and not just because I've read and loved Ginger Scott's writing in the past. I love sagas and there's something about a love story that's wrapped around family drama, and in the case of The Feud, we have twice that. However, I felt a disconnect with Jojo and Alex at certain points in the first book, and even though the second book had far better pacing and development, there were loose ends that had me wondering if there would be more books from this fictional universe. So, all things considered, I'd award The Wallace Girl three stars and The Sinclair Heir four stars, for an average rating of 3.5 stars. ♥

Purchase The Wallace Girl on Amazon.

Purchase The Sinclair Heir on Amazon.