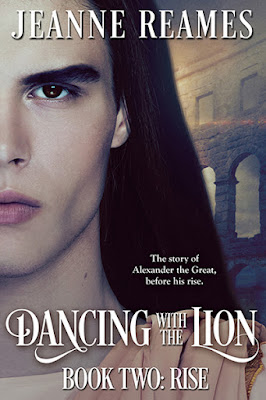 About Rise
The story of Alexander before he became “the Great”.

Finished with schooling, Alexandros is appointed regent of Makedon while his father is away on campaign. He thrives with his new authority—this is the role he was born for—yet it creates conflict with his mother and Hephaistion. And when his soldiers, whom he leads with unexpected skill, start to call him “The Little King,” his father is less than delighted.

Tensions escalate between Alexandros and his father, and between Makedon and the city-states of southern Greece. As the drums of war sound, king and crown prince quarrel during their march to meet the Greeks in combat. Among other things, his father wants to know he can produce heirs, and thinks he should take a mistress, an idea Alexandros resists.

After the south is pacified, friction remains between Alexandros and the king. Hostilities explode at festivities for his father’s latest wedding, forcing Alexandros to flee in the middle of the night with his mother and Hephaistion. The rigors of exile strain his relationships, but the path to the throne will be his biggest challenge yet: a face-off for power between the talented young cub and the seasoned old lion.

About the Dancing with the Lion series

Alexandros is expected to command, not to crave the warmth of friendship with an equal. In a kingdom where his shrewd mother and sister are deemed inferior for their sex, and his love for Hephaistion could be seen as submission to an older boy, Alexandros longs to be a human being when everyone but Hephaistion just wants him to be a king.

Learn more about the Dancing with the Lion series on Riptide Publishing.

A Guest Post from Jeanne Reames
Alexander’s Heroes: Achilles and Herakles
Alexander may have become a hero to subsequent generations, but he had heroes of his own. The two he preferred most were Achilles (Akhilleus) and Herakles (Hercules in Latin). In book 2, Rise, he admits to Hephaistion that when he was young, he used to dress up in an ancestor’s old antique armor and pretend to be Achilles. It’s not so very different from the armies of children soon to knock on doors for Halloween, dressed as Batman or Captain America.

Why Achilles and Herakles? He considered both to be his ancestors. We might view it as quaint, but the ancients really did believe the heroes of myth had been real, but that some of the living were descendants of them.

On Alexandros’s father’s side, he claimed descent from Herakles, and Herakles appeared on his first coins (along with Zeus, Herakles’s father, on the coin reverse). Later, Herakles would morph into Alexandros himself, still wearing the lion-head helmet. In Rise, readers will discover how he got that helmet (or at least my fictional version). The series title (Dancing with the Lion) will also be explained. Lions were a symbol of royalty in the Ancient Near East back into the Bronze Age, and Greece (and Macedonia) merely continued the tradition. 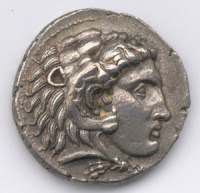 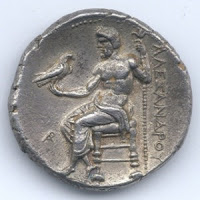 On his mother’s side, however, he counted descent from Achilles. The young, brash hero of the Iliad appealed to a young, brash king. Herakles is typically depicted (and thought of by the Greeks) as an older man, late 30s to 40s. Philip prominently linked himself to Herakles. But the young Alexandros preferred the young Achilles, often depicted in Greek art as beardless.

Unlike Homer’s other epic hero, the crafty Odysseus, Achilles was a straight-shooter. He said what he thought, and Alexandros likes to think of himself the same way. Achilles was also a runner, his epithet in The Iliad being “swirft-footed.” Likewise, Alexandros is a runner.

Yet another reason Achilles might have appealed involves his legendary friendship with Patroklos, who, by the 4th century BCE, most Greeks (and Macedonians) considered Achilles’s lover too. Patroklos was older than Achilles, typically shown in art as bearded. And of course, their relationship is depicted as a sexual one in Madeline Miller’s popular The Song of Achilles. 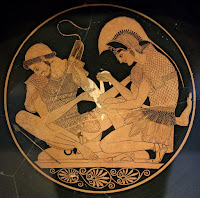 In Becoming, it’s memory of “Akhilleus and Patroklos” that eases Alexandros’s mind about his own new relationship with Hephaistion. As prince, he shouldn’t be the beloved (eromenos), but then he recalls that Achilles had been Patroklos’s eromenos, and lost no honor for it.

Recent scholarship has raised questions about just how much the historical Alexander and Hephaistion made an Achilles-Patroklos parallel. Some even go so far as to see it all as later Romanizing by the biographer Arrian, in order to please his patron, the Emperor Hadrian, who had a young lover, Antinoōs. So Arrian wrote Alexander and Hephaistion as Achilles and Patroclus…and by implication, so also were Hadrian and Antinoōs.

This is not a silly proposal, as Roman authors liked their historical-mythic parallels. Yet I’m inclined to think the comparison exaggerated rather than invented whole cloth, as Alexander’s interest in Achilles is evinced plenty elsewhere. To cast his best friend and probable lover as Patroklos would have suited him, and so I use it in the series.

In any case, Alexander the Great had his own heroes, on whose lives and deeds he both modeled himself, but against which he also competed.

Jeanne Reames has been scribbling fiction since 6th grade, when her “write a sentence with this vocabulary word” turned into paragraphs, then into stories…and her teacher let her get away with it—even encouraged her! But she wears a few other hats, too, including history professor, graduate program chair, and director of the Ancient Mediterranean Studies Program at her university. She’s written academic articles about Alexander and ancient Macedonia, and does her best to interest undergrads in Greek history by teaching them (et al.) to swear in ancient Greek.

Giveaway
To celebrate this release, one lucky person will win a $10 gift card to Riptide. Leave a comment with your contact info to enter the contest. Entries close at midnight, Eastern time, on October 26, 2019. Contest is NOT restricted to U.S. entries. Thanks for following along, and don’t forget to leave your contact info!