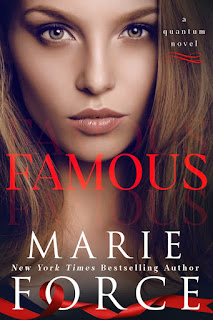 I can't believe we've come to the end of the Quantum series, but if it had to come to an end, I'm just glad that it did on a high. This series has a kinkier vibe compared to Marie Force's others, but it isn't just about kink. From the get-go, the cast of characters has piqued my interest, with each one in a select group of close friends finding love and their respective happily-ever-afters one book at a time--save for the original couple, Flynn and Natalie Godfrey, whose romance spanned the original trilogy that was released under the author's M.S. Force pen name. Can I also say that I love that this final book has a woman on the cover, making this great series end on an exclamation point, not just in terms of the story and main characters, but also in terms of the cover that the author has chosen for it.

Marlowe Sloane has seen each of her closest friends settle down and create homes and families for themselves over the years, and she believes she's finally found her person. She's ready to introduce him to the world she's kept private--to reveal the secret that only those she trust know. But no amount of planning could have prepared her for his actions--for him doing what he did to her. She finds help in the form of a friend, one who takes care of her as she mends her wounds, but he knows it'll take longer to heal the ones that can't be seen. They've known each other for a while, but it isn't until they're in each other's company far closer and more constant than before that everything that's been left unsaid may finally have a chance to come out in the open. Will they both take it?

At the request of the author, I'm not going to mention the name of the person Marlowe ends up with. I know that she said she didn't want to spoil it for readers who were going to be checking out reviews prior to the publication date, and while that date has come and gone, I think that allowing new readers to experience Marlowe's story alongside her will make for a better read. So yeah, no names, peeps. What I will tell you is that Marlowe's journey is one of emotional strength. She was a woman who had quite a lot to be proud of in her life, but she hoped to have what her friends had, and even though she stumbled on the way to her happily-ever-after, she fought hard and she had the absolute best man by her side. If you want to know who it is, go read Famous already! Five stars. ♥