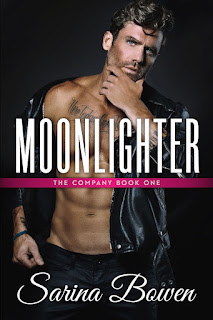 'Tis the season for spin-off series starters, fellow romance readers! Maybe it's just me, but I've already read a number of new books that aren't just spin-offs of popular books but they also happen to kick-off brand-new series for several authors. When it comes to a spin-off of a well-loved and well-known series in general or one book in particular, the bar is already set high, maybe even impossibly so. In the case of Moonlighter, the first novel in bestselling and award-winning author Sarina Bowen's The Company, there's the air of familiarity thanks to the backdrop of professional hockey courtesy of thirty-four-year-old Eric Bayer, veteran player for the Brooklyn Bruisers (which is also the title of the series from which this new series is spun off of and someone who was supporting character throughout), as well as the feel of something intriguingly new courtesy of The Company, the private security firm owned by Eric's father, Carl, and older brother, Max, and the same firm that handles security for the Bruisers. Eric's path crosses with thirty-two-year-old Alexandra Engels, Bruisers owner Nate Kattenberger's friend. She was also introduced as a supporting character in Brooklynaire, the fourth Brooklyn Bruisers book. Moonlighter takes place between the events in Brooklynaire and Overnight Sensation, which is the fifth Brooklyn Bruisers novel.

Let me get this out of the way: Moonlighter can be read independently of any or all of the Brooklyn Bruisers books. I promise that you won't feel lost or like there's something that's missing if you're new to Sarina Bowen or are familiar with her work but have yet to get to anything connected with the Brooklyn Bruisers series. So, a quick rundown of the basics of this new series starter: Eric is on break after the team lost game seven of the championships and is asked by his brother, Max, for a favor; Alex is the CEO of Engels Cable Media and requires the services of The Company after she's physically assaulted by an ex-boyfriend; and Eric and Alex spent one summer together twenty-one years prior. So, what does a hockey player have to do with the crisis a CEO finds herself in? Max catches Eric unaware, which leads him to be Alex's close-in bodyguard--pretending to be her boyfriend--while attending scheduled events in Hawaii. They're stuck in each other's company for a week, with Eric needing to keep Alex safe from her ex, but there's no one around to keep him safe from doing x-rated stuff with her. But when an unknown threat makes its presence known, the stakes are higher because Eric and Alex are no longer just friends.

There's a lot more that goes on in the story than just the threat that Alex is facing and Eric being her bodyguard while he's on break from playing hockey, and I've been waffling on whether I should mention those major tidbits or not, but ultimately, I don't want to spoil the book for anyone who has yet to read it. This is the sort of series starter that needs to be experienced firsthand because I feel it'll give readers a better appreciation for Eric and Alex's love story. Now, if you're familiar with the author's Brooklyn Bruisers series, you're going to love seeing those familiar characters that already got their happily-ever-afters. If you have yet to familiarize yourself with the awesomeness that is the Bruisers team, you can totally read them separately from all things The Company. While this new book has its fair share of hockey in it, there's also some suspense and mystery thrown into the mix. Of course, the romance, sex, humor, and even a bit angst. Eric, in all his grumpiness, was a hoot but he also had a lot of heart, and Alex was someone who managed to surprise me as the story moved forward and her character developed. I'm looking forward to seeing who could be up next in the series--although I do have my suspicions who Max Bayer could be paired with--and I have the highest hopes that the books to come will live up to the standards set by Moonlighter. Sarina Bowen's done it again, folks, not that I'm all that surprised. This series starter snags five stars. ♥