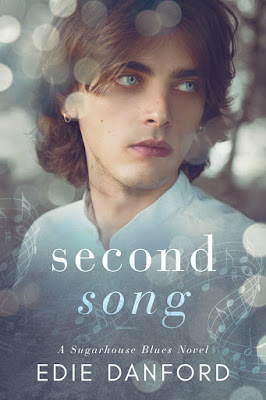 Sage
Four years ago, a brutal attack shot down my soaring music career. My bodyguard, a man I loved like a brother, was killed, and serious injuries left my voice permanently damaged.
Songs silenced, I retreated to my Vermont home, unsure I’d ever perform again.
Now I’m ready to go public with my new act. But, yeah, I’m a little nervous. So to handle security for a trial-run tour, I’m hiring a guy I trust absolutely—Antonio Callan, my former bodyguard’s brother.
But when Antonio shows up, all super-chill fierceness and warm, understanding eyes, I’m up against an unexpected risk—losing my heart.

Antonio
Touring backwoods bars with a reclusive singer is the wrong gig at the wrong time. But how can I refuse the wounded kid my brother thought of as family?
After a week in Vermont, I’m feeling more helpless than heroic.
Sage has grown up, and I’m crazy-attracted to him. His broken-but-beautiful voice knocks me out, and his quiet courage sings to my soul. The more time we spend in close quarters, the harder it becomes to resist our attraction.
Soon, Sage’s second act is rocketing to the top of the charts, and being his hero takes on a whole new meaning. It’s up to me to take his cue and find the courage to reach for a star.

Second Song, a 108,000-word gay romance, is the first in the Sugarhouse Blues series and can be read as a stand-alone. Contains angsty-hot pining (and Vermont pines), first-time lovin', sappy songs (and Vermont maples), and the healing power of loooove. 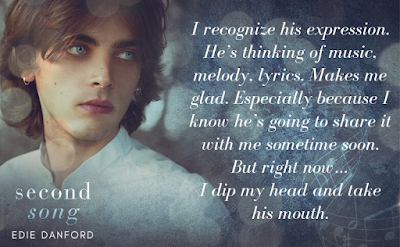 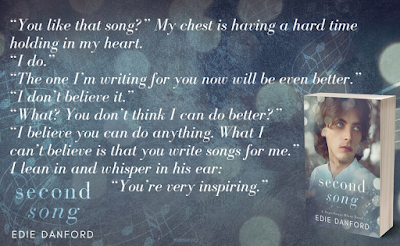 An Excerpt from Second Song
“This Chicago weather might send you back to Cali real quick.” I gesture toward the windows and the sleet-rain coming down.

Sage smiles slowly as he glances from the window to me. That addictive guitar lick plays in my head again. “This amount of snow and ice does not impress. But you—all hot-bodyguard official in a suit…” He gives me a greedy-hungry look, like maybe I’m one of those maple creamees he loves to slurp. “I’m very impressed.”

“Likewise.” I smile back, my gaze traveling over his features. He’s the sunny beach come to visit. Skin tanned gold, eyes ocean blue, and damn, that smile heats me all the way through.

He looks down at his tea, then he takes a breath and meets my eyes. “So I came to Chicago to take you on a date. That is, if you say yes when I ask you.”

I gently ease against the chair’s back. And then I loosen my tie because breathing has become a genuine hardship. “Sage. Damn.”

“Just…let that sit for a while. I’m too chicken to actually ask you at the moment.”

I make a sound that’s half-laugh, half-curse, and I wonder what I’ll say when I can speak.

I am beyond flattered he’s come all this way to ask me out. I’d be the biggest dick in the world if I refused. I don’t want to refuse. Excluding life-and-death and world-peace scenarios, I want Sage more than I’ve ever wanted anything, ever. But what would happen if I said yes?

Lots of shit has happened in the last couple months, but I don’t think our personal circumstances or our feelings have changed. I’d still be incapable of a casual hookup with Sage Hazen, still incapable of following him where Second Song takes him.

And as for him…

Well, he is not looking casual. Two sunset-colored spots mark the center of his cheeks. His hands are shaking. He stands, walks to the fireplace, and picks up the guitar. His left hand fumbles the tuning pegs. His right hand makes sweaty-squeaky sounds on the shiny wood.

He goes to one of the windows, turning his back to me as he tries to tune and strum. He’s skinnier than he was two months ago; his stupidly sexy skinny jeans don’t cling as tightly as they’re supposed to. Closing my eyes, I pinch the bridge of my nose and try to take steady breaths.

“Working on something new,” he says.

He turns to face me. “It’s sexy,” he says, waggling his eyebrows, making an effort and succeeding.

I laugh. “Everything you do is sexy.”

“It is. And you have about forty million fans who’d agree with me.”

I’m lucky enough to know him, though. And that’s really the point of this meeting, isn’t it?

Edie Danford lives in Vermont with her husband, two sons, and random creatures that might or might not be pets. She loves libraries (where she’s found play, work, and love since she was a kid), long walks (unless ice is involved), lewd language (in the right context), luscious romance (of any variety), and alliteration.