Review: Hold On to Hope by A.L. Jackson 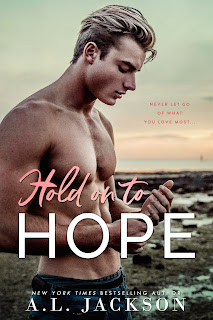 Loving her had been the easiest thing in the world.

Letting her go the most brutal.

Aside from being a bestselling author, A.L. Jackson should add "heartstrings tugger extraordinaire" to her list of talents because my heartstrings were tugged time and again while reading her latest novel. Hold On to Hope is a spin-off of her Fight for Me series and features Frankie Leigh Gunner, daughter of Rex and stepdaughter of Rynna whose story was told in Show Me the Way (Fight for Me book one) and Evan Bryant, stepson of Kale and son of Hope who story can be read in Follow Me Back (Fight for Me book two). Frankie and Rex's story may be read as a standalone, however, because they were introduced in their respective parents's novels and they play big roles in those stories, I'm going to highly recommend that you read, at the very least, the first two Fight for Me books, too. Aside from Rex and Rynna and Kale and Hope, the rest of the cast of characters of the aforementioned series make appearances in this new book. If all that isn't enough reason, allow my own reading experience with this stellar series make you both curious and enthused about checking it out. I promise, they're all truly wonderfully fab reads.

Frankie Leigh was five when she met the eight-year-old boy with a broken heart who would became her first best friend. Over the years, Evan would also become her first love even as he battled with his health issues and learned to live with his new heart and his deafness. He was a permanent fixture in her life and by the time she was eighteen, she knew without a doubt that she wanted nothing more than to spend the rest of it with him. But it was also during this time that Evan made a choice that would change everything for everyone who held him dear--he walked away from his family and the girl who owned his heart, leaving her with nothing more than a letter that he knew would break her. Over the next three years, Frankie has struggled to let go of the boy she loved, and just when she thought she was finally moving on, Evan returns--and he isn't alone. Is there any hope left to hold on to?

You'd think by now I'd be more prepared before diving into an A.L. Jackson novel, yet she's once again managed to put my poor battered heart through the wringer with Frankie and Evan's story! These two were so memorable as children, but as adults, their own second chance love story allowed them to create their personal legacy separate from that of their parents. I don't want to give too much away as far as the story line is concerned, but allow me to divulge that this does have a mystery suspense aspect to it. I had my suspicions as to who was behind the threats and harassment that Frankie and Evan were experiencing, but their motivation behind it shocked the heck out of me. Yep, aside from tugging on my heartstrings, this author also threw in a twist I never saw coming, enough to have my mouth hanging open for a good few seconds. With Jackson's impeccable writing and a story about the healing power of love and forgiveness, Hold On to Hope is one of the romances that stays with you. Five-plus stars. ♥

Purchase Hold On to Hope on Amazon.