Review: A Touch of Dark by Lana Sky (Painted Sin #1) 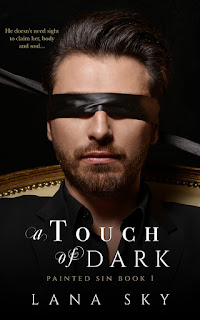 You should know what you get when you read a Lana Sky story, yet I'm constantly taken by surprise whenever I start a new book of hers and I mean that in the best way possible. A Touch of Dark is the first book in Sky's Painted Sin series, and here, we're introduced to Juliana Thorne, the daughter of a disgraced judge who continues to be tormented by a monster from her past. She is warned by her father to avoid Damian Villa at all cost, a gallery owner who also happens to be the head of La Muerte, a much feared crime syndicate known to have ties to the Colombian cartel. But whether it's fate or something far more sinister, Juliana's and Damian's paths cross, and their lives become entangled in ways that make Juliana feeling more ensnared with no means of escape from the sensuous yet equally sinister draw that is Damian. Can Juliana be freed even after she's been touched by darkness?

This was a truly great start to the author's new series. From the moment we meet Juliana at the beginning of the book, it's clear that not all is well--that someone is playing some sick game, with him always steps ahead. Damian is an enigma in many ways. He's a blind who knows all about the dark, and not just the actual kind. Is he who he portrays himself to be? Could he prove to be the one who could very well save Juliana from the danger that continues to chase after her or is he some evil puppet master orchestrating everything? It goes without saying that this book does end in a cliffhanger, so there's a short wait--with book two releasing on the 11th of November, that will mean about a three-week gap--before we get answers and everything is revealed. I know some will choose to wait till the second book is out before reading A Touch of Dark, but either way, just make sure to read it! Five stars. ♥