Review: Break You by MV Ellis (Boys of Trinity Hall #1) 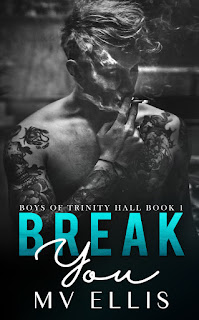 "I don't believe in coincidences, fate, or even kismet, but I do believe in karma, and that's what brought us together."

MV Ellis was a new-to-me author prior to me reading the first book in her Boys of Trinity Hall series, and now, I can't help but feel like an absolute idiot for not having read anything of hers before! Break You is a bully romance that puts a slew of others that employ the same trope to shame. We have Rukiya Gordon, better known as Rocky throughout the book and she certainly lives up to her nickname given that she knows what it's like to have to fight for what she wants and needs. She's given a scholarship to Heathcote University, and it's there that she meets Xavier Cross, and unlike Rocky, Xavier's world is all about wealth and privilege. Theirs is an insta-hate sort of thing...with a kinda-maybe-sorta lustful undercurrent sizzling between them. Rocky and Xavier have absolutely nothing in common...or at least that's what it seems like in the beginning, because something does tie them together, and in order for Xavier to exact the revenge that he seeks, he'll have to play villain and break the girl who calls to him in a way no one else ever has. But would he still do it if he knew he may have once been her hero, too?

From the shocking prologue to the endearing epilogue and everything in between, this series starter had me, hook, line, and sinker. All bully romances have a strong enemies-to-lovers element to them, but the manner in which MV Ellis created this story that had more to it than the usual bully-actually-loves-heroine sort of angle. Nope, what this author did was weave her own story that gave the bully slash hero a motive for his targeting the heroine. Also to her credit, Ellis has given readers a heroine with a backbone in Rocky. She's no damsel in distress, and Xavier is certainly no knight in any sort of armor, shining or otherwise. They really are Angry Girl and Loaded Guy but there's also so much more to them than the not-so-cutesy nicknames they've slapped on each other. Their respective personal histories aren't exactly fairy tale-like, but these two rose above it all, and once they were together, it was like waiting for two atoms that you aren't sure would bond or if they would each split and explode. But that's what makes Break You a five-plus-starred read: Ellis keeps you on your toes, and it's the best thing ever. ♥

Purchase Break You on Amazon.